8 Ways to Compare Fractions in the Late Elementary Grades

How do you compare fractions in the late elementary grades? In this post, I want to share a collection of methods that you can use with students, in Grades 3–5, to compare fractions. Plus, download a FREE set of problems in which students are asked to use and think about different strategies for comparing fractions. 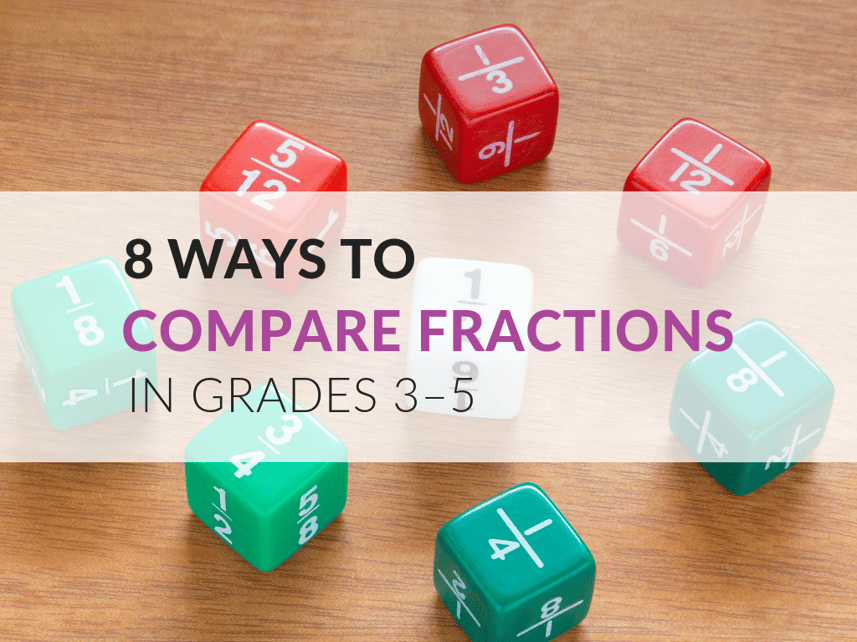 When I was younger, I only learned one way to compare fractions. It wasn’t until I was tutoring math as a community college student that I started to explore the different ways of representing and comparing fractions. There have been a few times as a teacher when I have had “Aha!” moments that have given me even deeper insights into how to compare fractions.

Students’ ability to justify their choice of strategy for comparing fractions is part of Standard for Mathematical Practice 3, “construct viable arguments and critique the reasoning of others.”

How to Compare Fractions In Grades 3–5

My printable Explaining Your Reasoning to Compare Fractions Activity asks students to compare fractions using given strategies, by choosing between strategies, and by creating a problem of their own. 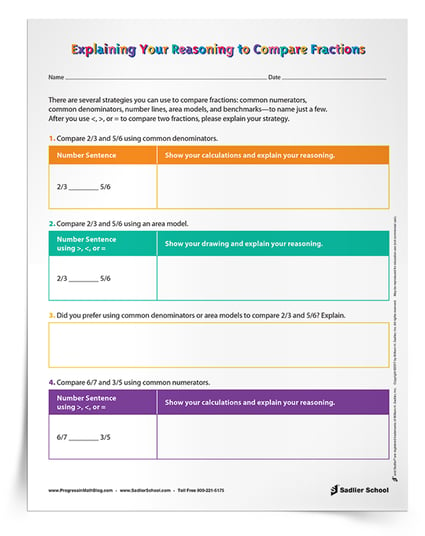 This is the easiest situation in which to compare fractions. If two fractions have equivalent denominators, then compare the numerators to determine which faction is greater. Students at the earliest stages of learning about fractions should be able to do this.

I was quite surprised to learn about this a few years ago. If two fractions have equivalent numerators, then the fraction with the lesser denominator has a greater value. The first time I heard this strategy, I am pretty sure that I disagreed with the person who told me it was possible! It is based on the idea that unit fractions with lesser denominators have a greater value than unit fractions with greater denominators (for instance, ⅓ is smaller than ½). This concept can be generalized to any fractions with common numerators—but I had to be convinced of this, as I had never learned it in grade school.

If two fractions have denominators that are easily related (such as 4 and 8), then it is easy to scale one of them up quickly in order to compare them. This is particularly useful when working with ruler measurement and line plots using halves, fourths, and eighths. Using measurement and data topics in Grades 3 to 5 is an important way to support students’ reasoning about comparing fractions with denominators 2, 4, and 8.

If two fractions have numerators that are easily related (such as 3 and 6), then scaling the fraction with the lesser numerator to be equivalent to the greater numerator allows comparison based on their denominators. For instance, to compare 3/4 and 6/7, scale 3/4 to be 6/8. Comparing 6/8 and 6/7 is easy if one knows that 1/7 is greater than 1/8.

Subdividing a unit length on a number line in order to compare two fractions is a great way to assess students’ comprehension of fractions. I like to let students use whiteboards for constructions like these, as they can more accurately refine their subdivisions if needed.

Circles, squares, and rectangles are popular choices for subdividing in order to compare fractions. Not only can the teacher assess students’ equal subdivisions, but also the idea of equally-sized unit wholes.

Sometimes comparing fractions to benchmarks such as 0, ½, or 1 is a quick way to compare fractions. For instance, when comparing 5/9 to 6/13, students can explain their reasoning by stating that 5/9 is more than ½ while 6/13 is less than ½.

As you can see, students have many options when comparing fractions. There are even more ways (converting to decimals, for instance) that will become important in later grades.

Hopefully, the information and printable download featured in this post will help you build students’ ability to justify their choice of strategy for comparing fractions!