How Math Games and Activities Increase Student Proficiency in Grade 7

Grade 7 students develop their skills to reason abstractly and quantitatively and learn the importance of using representative samples for drawing inferences. They study ratios, scale drawings, rational and negative numbers, and how to graph proportional relationships. Solving real-world problems, (including objects such as triangles, quadrilaterals, and polygons) and practicing how to calculate interest and discounts are aided by activities that use a variety of models.

Physical and visual models of decimals are difficult to extend for more than a few places, because the size of the model changes so drastically as you move from place to place. Viewing decimals as a sum of fractions gives students another way to think of decimals.

Next, draw a number line like the one shown below. Use an arrow to represent each digit of the number written on the board. As you “build up” the number, students can see how relatively little the digit in each additional decimal place affects the size of the decimal.

Note that even though the tenths is 9 (the highest possible), the number does not reach 238.

Discuss the fact that no matter how large each succeeding digit is, it’s arrow cannot be longer than the arrow before it.

for Dividing by Fractions

On the board, write 8 • 3⁄4 . Then, as outlined below, use a pictorial or physical area model to show that multiplying by 3⁄4  is the same as multiplying by 3 and then dividing by 4.

Since the fraction bar represents division, another way to think about 3⁄4  is 3 ÷ 4.

Think of multiplying by the fraction 3⁄4  as two operations with integers:

Since division is the inverse, or opposite, of multiplication, you can divide by using the opposite operations as we used for multiplying.

Think of dividing by the fraction 3⁄4  as two operations with integers:

To focus students’ attention on how the behavior of a function is reflected in the shape of its graph, use a model that does not involve numbers and represents the different types of slopes.

Compare these models, each with a different kind of step, or slope, as shown below. Emphasize that slope is a ratio that relates the vertical change, rise, or y, to the horizontal change, run, or x. Note that the three models at the top show a positive rise from left to right, reflecting a positive change in y. 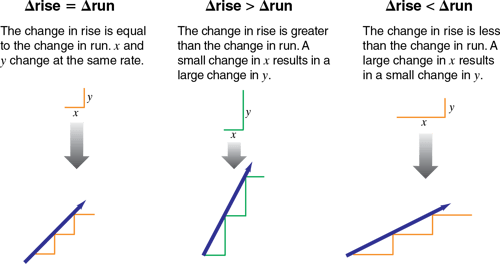 Use the same approach for models that show functions that “fall” from left to right, representing a negative slope in which the change in y is negative.

Construct a graphic display to show the relationships among length, area, and volume.

2. Disassemble each larger cube into unit squares, and stack each group to establish a bar that shows the total number of unit squares and cubes. This creates a triple-bar graph as shown below.

for Mean and Median

Use a bar graph of data to illustrate the difference between mean and median. 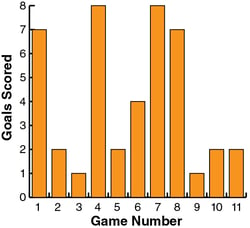 Use visual models and cutouts to reinforce how a percent increase or decrease describes the size of a change in relation to the original amount.

Use a similar procedure to model a percent decrease of 25%.

Build a graph to show the relationships among side length, perimeter, and area.

1. Start with a square and construct three other, larger squares with side lengths two, three, and four times the length of the side of the original square.

3 Draw a line next to each stack of unit squares to show the total side length, or perimeter, of each constructed square. 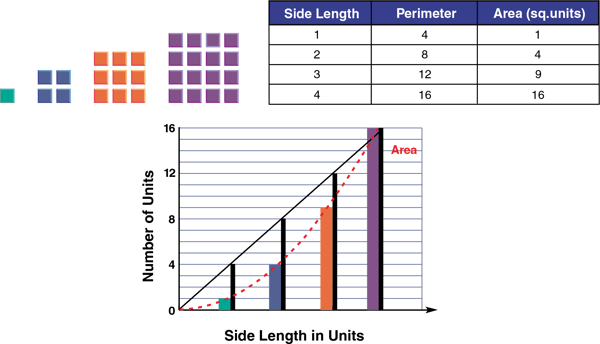 Use a rectangle to show why the product of 1⁄6 × 1⁄6 can be used to find the probability of rolling a 5 and then another 5 when a 1–6 number cube is rolled twice.

1. Divide a rectangle into 6 equal sections to show the number of times you would expect each number on a 1–6 number cube to come up when the cube is rolled many times.
Shade the "5" section. Express the number as a fraction: 1⁄6.

2. Divide the “5” section into 6 equal subsections to show the number of times rolling a 5 will be followed by a roll of each number.
Shade the “5” subsection. Express the number as a fraction: 1⁄6 . Multiply the two fractions. 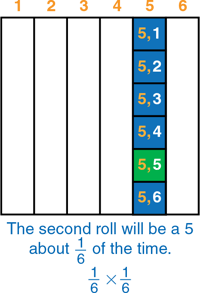 A geometric model for proportions takes advantage of students’ familiarity with analogies and other patterns that involve geometric figures.

Use physical models to show how angles can change while the relationship between them is constant.

Model for Angles of a Transversal

Cut out 3 strips of cardboard and assemble them with fasteners to form a transversal. Rotate the transversal as shown (the other strips remain parallel). 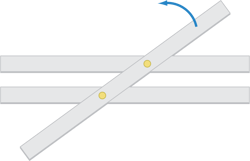 As the angles change in size, focus students’ attention on pairs of angles that remain congruent and pairs that remain supplementary. 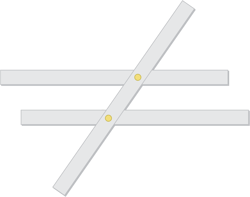 Model for Angles of a Parallelogram

Use 4 strips and fasteners to form a rectangle. Rotate a pair of opposite sides as shown . . .

... to create a nonrectangular parallelogram. As the angles change in size, focus students’ attention on pairs of angles that remain supplementary and are congruent. Point out how the decrease in one angle equals the increase in another angle.

Objects placed on the pans of a balance push down with the force of their weight. So, positive quantities and addition can be represented on a balance model simply by placing objects or drawing figures on the pans. Negative numbers and subtraction can be represented by the opposite of a downward force, an upward force – such as the force of someone pushing up from under one of the pans. 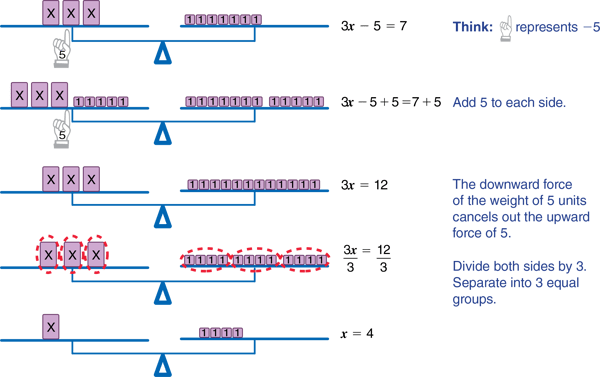 An inequality like 4 < 6 can be pictured on a number line. Given two real numbers, the lesser number will always be to the left on the number line.

Show two numbers on a number line and provide examples of adding the same amount to the two numbers.

Note that in every case, the sums are still in the same order. The red point is still to the left of the blue point.

Use a similar model to show that subtracting the same amount from the original numbers does not change the order either.

Then use the model to demonstrate what happens when two numbers are multiplied (or divided) by the same positive amount. Again the order does not change.

Finally, use the model to show that multiplying (or dividing) by a negative amount does not change the order. Note that the red and blue points switch places. The inequality sign must be reversed to keep the sentence true.

Models can help students understand integers below zero, but no model seems to work perfectly in all instances1. Coins or two–colored counters are particularly useful for helping students understand the distinction between negative quantities and subtraction.

Let one side of a coin or counter represent 1 and the other side -1.

Use the model to show the different meanings of the minus sign in a numerical expression.