How Math Games and Activities Increase Student Proficiency in Grade 3

Students in Grade 3 will learn about multiplication, division, and practice strategies for multiplication and division within 100. They will also develop an understanding of fractions and know how to analyze two-dimensional shapes using counters, base-ten blocks, coins, decimal squares, measuring tools, pattern blocks, area models, and number lines.

Much research suggests that concrete activities facilitate students’ geometric thinking. This instruction model can be used to have students subdivide, combine, and transform shapes, investigate the relationships among shapes, and find perimeter and area.

Example A: Combine pattern blocks to make a shape. Then, recombine them to make another shape.

For each new shape, have students complete a table to display its properties and write a description in words.

A hexagon is a polygon with 6 sides.
A parallelogram is a quadrilateral with opposite sides that are parallel and equal.

Example B: Trace the new shapes on 1/4-inch grid paper and estimate their perimeter and area by counting squares along their sides and squares inside each.

Many recent studies suggest the use of technology may facilitate students' data organization and graphing skills. The instruction model presented here is an example of using a computer graphing program to achieve this goal.

Step 1: Take a survey.
“What is your favorite pet?”

Step 3: Create a graph.
Students create a picture graph on the computer by dragging one of the four symbols on the top of the screen (hat, soda, hot dog, and popcorn) into the column with the same label. They continue to add symbols to complete the graph.

Step 4: Choose an appropriate graph.
Students make a bar graph to view the data in a different way. The computer allows for simultaneously viewing of two different graphs. In this situation, students see a bar graph is more efficient in presenting a larger quantity of data.

There are more options for manipulating and changing the graph on a computer. For example, students may change the scale of the graph by selecting "Scale Maximum" from the graph menu. They may also view other types of graphs by clicking on the small icons at the bottom of the screen. 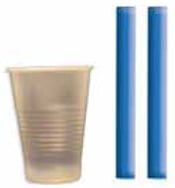 To show this general situation symbolically, students can write the expression c + 2, using the variable c to stand for the unknown weight of the cat.

The cup can then be used to demonstrate that a variable can have different values. Place different numbers of counters in the cup to represent different weights of cats.

Students who understand how to represent the general situation are ready for a specific situation, such as when the scale reads 10 pounds. Place an empty cup and 2 counters on one side of a double pan balance and 10 counters on the other side.

Students who understand the concept of a variable and a balanced number sentence will be ready for solving equations.

Parallel number lines can also be used to compare fractions with unlike denominators. This is especially helpful for those students who have difficulty separating the rules for whole numbers from the rules for fractions. These students may think that 2⁄3 is less than 3⁄6 because 2 is less than 3 and 3 is less than 6. However, the number lines show that the distance from 0 to 2⁄3 is greater than the distance from 0 to 3⁄6 . So 2⁄3 is greater than 3⁄6 .

Students who have a firm grasp of the meaning of a fraction as part of a whole and the relationship of fractions to each other have the foundation for computing with fractions and working with decimals, percents, and ratios.

A number line is an effective tool to help students visualize relationships between and among numbers. Young students especially will benefit from “skip counting” on a number line.The following instruction model is aligned with the concrete, pictorial, and abstract pedagogical approach. Here, a number line serves as a pictorial representation of numbers counted. It helps students to bridge the gap from concrete manipulation of objects to the symbolic representation of the numbers.

They can also use the number line to find missing factors. To find the missing factor in ? × 3 = 18, count the groups of 3 needed to reach 18.

Just as a number line is an effective tool for helping students visualize multiplication as repeated addition, it is also an effective tool to help them visualize the inverse operation, division, as repeated subtraction. Division as both sharing and as separating can be modeled on the number line. The following instruction model is aligned with concrete, pictorial, and abstract pedagogical approach. Here students record the work they do with concrete materials on a number line, and then represent it symbolically with numbers.

Example A: Share 12 counters equally by putting an equal number of counters in each of 3 groups. How many counters are in each group?

As students repeatedly take 3 counters away from the 12 counters to place 1 counter in each of 3 groups, they can record the subtractions on the number line.

Example B: Separate 12 counters into groups of 4. How many groups?

An area model drawn on grid paper is closely related to an array and is also a powerful representation of the multiplication algorithm.

Example A: Use partial products.
The grid below shows the area of a 12 by 8 rectangle. It also models how the product of 12 × 8 is the sum of two partial products by demonstrating the application of place-value concepts, basic multiplication facts, and the Distributive Property of Multiplication over Addition.

This leads to the use of the expanded multiplication algorithm.

Students who understand what each partial product represents in this expanded algo- rithm will be able to easily understand that the traditional multiplication algorithm is simply a shortcut.

Example B: Decompose a factor.
An area model can also be used to represent a different approach to solving 12 × 8. Here the first factor is broken apart to make two basic facts and the Distributive Property of Multiplication over Addition is applied. This approach is aligned with composing and decomposing numbers. 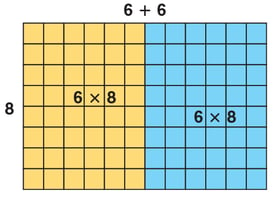 An array is a rectangular arrangement of objects with the same number in each row. Various research findings suggest that arrays are powerful representations of multiplication. In this chapter, arrays are used to facilitate students’ thinking strategies for single-digit multiplication and division.

The array below is an example of how this tool can be used to find a product using known multiplication facts. The product of a new combination, such as 7 × 8, can be found by adding the products of the known facts 5 × 8 = 40 and 2 × 8 = 16.

Students who understand how to use arrays to model fact families will be able to easily understand why some sets of numbers, such as 4, 4, and 16, have only one representative array. They will also be prepared to eventually understand the concepts of squares and square roots.

The pictorial representation below shows one way to model 138 with base-ten blocks.

By trading a hundred for tens and/or tens for ones, 138 can be modeled in 18 other ways, only two of which are shown below.

The National Council for the Teachers of Mathematics suggest that students need to have many experiences decomposing and composing numbers in order to solve problems flexibly. For example, 48 can be thought of as 40 + 8, 30 + 18, 50 − 2, 6 × 8, and 4 dozen. Each form may be useful in some particular situation. The following examples demonstrate various strategies of adding multi-digit numbers by decomposing and composing numbers. In each case, students should use base-ten blocks to help them conceptualize the process.

Example A: Break the second addend into parts.

Example B: Break apart both addends to add tens and ones separately. 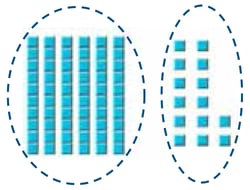 The following instruction model shows how the division algorithm can be taught through concrete models. Here, students record the work they do with base-ten blocks, representing it symbolically with numbers.

Students who grasp this relationship of concrete to abstract will have the foundation to apply the division algorithm to greater whole numbers as well as to rational numbers.

Students need many experiences decomposing and composing numbers in order to solve problems flexibly. The following example demonstrates a strategy of breaking numbers apart to subtract.

Some students benefit from being able to visualize decimals. Pennies and dimes are effective concrete models for their fractional relationships to dollars, and students have already used place-value charts to show money amounts. Decimal squares are effective pictorial models for helping students see the relationships between decimals and common fractions. Used together with place-value charts, money and decimal squares help students bridge the gap from concrete models to the symbolic representation of decimal and fraction equivalency.

If a decimal square is used to represent 1 dollar, then each column represents 1 dime, and each small square represents 1 penny.

Some research findings suggest that it is necessary for young children to recognize the need to use identical units in measurement and understand that each measurement unit could be partitioned into smaller parts. Research also suggests that many children respond to linear measurement with a nonzero origin by simply reading off whatever number on a ruler aligns with the object.

Provide students with a set of three lines drawn on paper such as, 3 5⁄8 inches, 6 1⁄32 inches, and 5 3⁄8 inches long; three types of pasta, such as curly, elbow, and ziti; and an inch and centimeter ruler.

Have students line up pieces of pasta to measure each line and record their measure- ments in a table. Discuss why different types of pasta are nonstandard units of measure.

The same lines can be used to measure to the nearest inch, half inch, and quarter inch. Discuss why an inch is a standard unit of measure. Check that students are aligning the zero end of their rulers with the beginning of each line.

Then, have students measure each line by aligning the 1-or 2-inch mark with the beginning of the line. Have them compare these measurements with the first set of measurements. Discuss how their work on this task was different.