In current research and practice for early mathematics education, composing and decomposing numbers is taking on an increasingly import role in developing students’ number sense. The use of number bonds is instrumental in helping students gain a deeper understanding of numbers and to visualize the relationship between numbers. Number bond activities were popularized in Singapore. However, they are appearing more frequently in the American math curriculum. In this post I will give you three decomposing number activities that include the use of number bonds. Two of the activities show how to extend activities in the Progress in Mathematics series to include number bonds.

A number bond consists of three circles. However,I have seen both squares and circles used. A number bond illustrates that a whole is made up parts and that the parts when combined make up a whole. In case number bonds are new to you, below is one for the number 7. The parts are on the bottom and the whole, the total, is on the top. Number bonds help students visualize how numbers can be composed and decomposed. For example, this number bond shows one way to compose and decompose the number 7. Seven is composed when the parts, 5 and 2, are combined. Seven can be decomposed into the parts 5 and 2.

In Kindergarten, students are composing and decomposing numbers of ten or less. The emphasis is on numbers that make five (1 + 4, 2 + 3,…) and numbers that make ten (1 + 9, 6 + 4,…). The decomposing number activities below focus on numbers to 20, but you could easily modify them for ten, five or any other number. If you are using the Progress in Mathematics series, then you use number bond activities to show addition facts in Chapters 7 and 8.

In First Grade, students are composing and decomposing numbers to 20 using number bond activities. Grade 1 teachers are laying the foundation for place value by teaching that numbers greater than 10 and less than 20 can be thought of as 10 and some ones (a single digit). The use of number bonds reinforces this concept. If you are using the Progress in Mathematics series, then you can use number bond activities in Chapters 2, 3, 6 and 10.

In Second Grade, students build on work from decomposing number activities for addition in the earlier grades to transition to subtraction. Students should be able to add and subtract numbers less than 100 with fluency by the end of second grade.

#1 Number Bond Activity; The Case of the Missing Pennies

You can adapt the activity, The Case of the Missing Pennies, from the Grade 2 Teacher’s Edition of Progress in Mathematics, to use number bonds. You will need 20 pennies and a small cup.

The second activity is an adaptation of the Clip the Sum from Progress in Mathematics, Grade 2 Teacher’s Edition. You will need a game board, shown below, counters and paper clips.

The third of the number bond activities is a poetry frame. Students write a short poem using the frame then write the number bond and an addition sentence to represent their poem. The frame connects math to English Language Arts by focusing on Common Core Standard W1.2: Write informative/explanatory texts in which they name a topic, supply some facts about the topic, and provide some sense of closure.

Here are a couple of examples of the poems students could write: 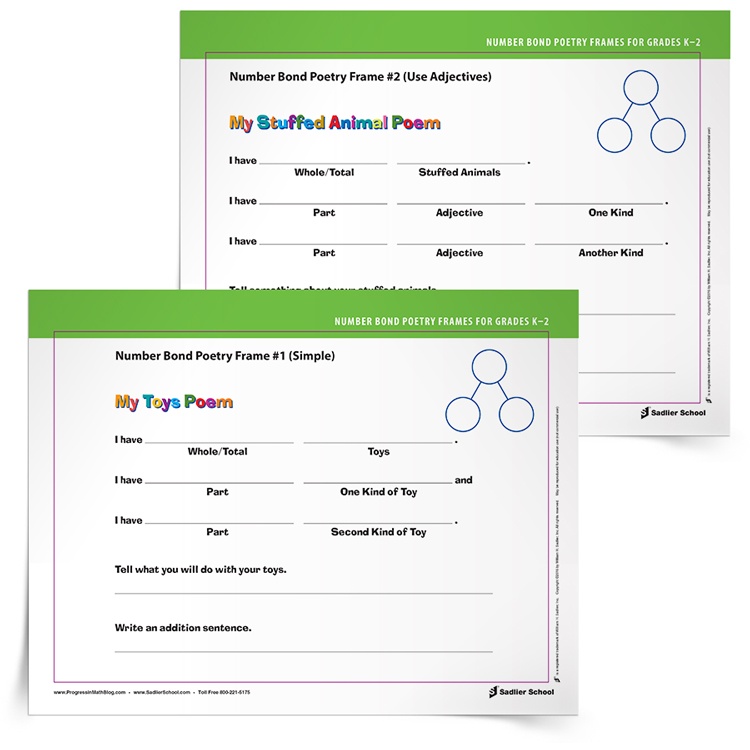