In this article, you'll find tips for reviewing or teaching parts of speech in middle school and high school. Plus, download five creative printables for your classroom. 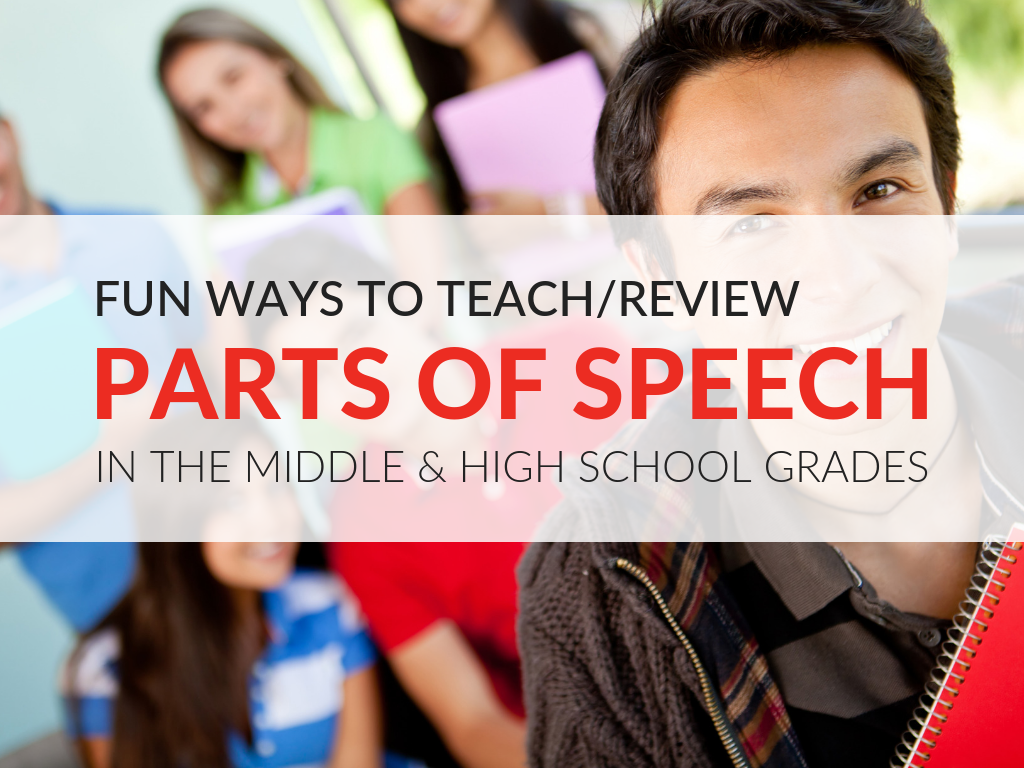 Memories of my middle and early high-school English class might be similar to your own: desks in rows, quiet work time, and sentence diagramming. Remember sentence diagramming? That tedious puzzle of using one line under the subject, two lines under the verb, a backslash to separate the subject from the predicate that led to the more complicated algorithm of circles, squares, and arrows. All of which was meant to do what? Improve writing? Increase identification of sentences? Keep students quiet?

Fortunately, research has led teachers toward practices that improve writing, namely, spending time to write. The National Council of Teachers of English released a position statement in 1998 stating the following: "Decades of research and practice have shown that teaching of grammar in isolation does not improve composition skills, nor does it help students to acquire Standard English usage." How might teachers of middle and high school students provide students with relevant instruction around basic parts of speech?

Students need to be able to construct quality sentences that communicate information accurately and clearly. Understanding basic parts of speech is the first step to this effective communication.

The 8 Parts of Speech Students Should Know

A noun is a word used to refer to people, animals, objects, substances, states, events, ideas and feelings. A noun functions as a subject or object of a verb and can be modified by an adjective.

Types and Examples of Nouns

Nouns can be people as in the dancers, or a name: John.

Nouns can be things as in a lion, a table, or places as in Paris.

A pronoun is used in the place of a noun or phrase.

Adjectives are used to describe or specify a noun or pronoun

An adverb is used to modify a verb, adjective, and other adverbs.

A preposition is a word that relates a noun or pronoun to some other word in the sentence and often forms a phrase that shows where, when, how, or why

Interjections are used to show surprise or emotion.

Teaching Parts of Speech in the Middle School Grades

One way to avoid the traditional grammar instruction done in isolation, teachers can get students up and moving. For grades 6-8, most state standards convey that students should know everything from proper case pronouns (subjective, objective, possessive), to intensive pronouns (myself, ourselves), to correcting vague pronouns. By including pronouns in student practice, teachers will ensure these elements are taught.

In addition, students need to use commas to set off nonrestrictive elements – we will do this when we use interjections! Students must also explain the function of clauses, know how to use a comma to separate coordinate adjectives, and how to form and use verbs in a variety of ways.

Creative Ways To Teach Parts Of Speech In Middle School

RESOURCE: Pin the Part of Speech on the Pig Game

When you download the Pin the Part of Speech on the Pig Game, your students will get much more practice than is deemed important in state standards! This game is not only a creative way to teach parts of speech, but it gets students up and moving while they learn.

The Pin the Part of Speech on the Pig Game combines learning/practicing the parts of speech and a modified version of the game Pin the Tail on the Donkey. Although this game was originally created for elementary grade levels, its a great activity for parts of speech practice in the middle grades.

Objective of Game: Pin the part of speech on the pig! With a grammatical twist on the classic game, students will choose the part of speech that is the focus of the day. Monday = nouns, Tuesday = verbs, Wednesday = adjectives, Thursday = adverbs, Friday = prepositions.

How to play in the classroom: Middle school students love a competition! Form groups of 3-5, depending on your class size, and, start tallest to shortest. The first student will choose a Part of Speech card from the card pile. The person behind them will put the blindfold on them then slowly spin them three times and set them off to pin the part of speech on the pig. Use a small piece of tape to adhere the card to the pig. The blindfolded student will return to their team, exchange the blindfold and repeat the process. The game can end at any time: when the first pin on the tail happens, when everyone has gone once, or when all the cards are gone.

Download one or multiple copies of the game, depending on your class size and start playing today. 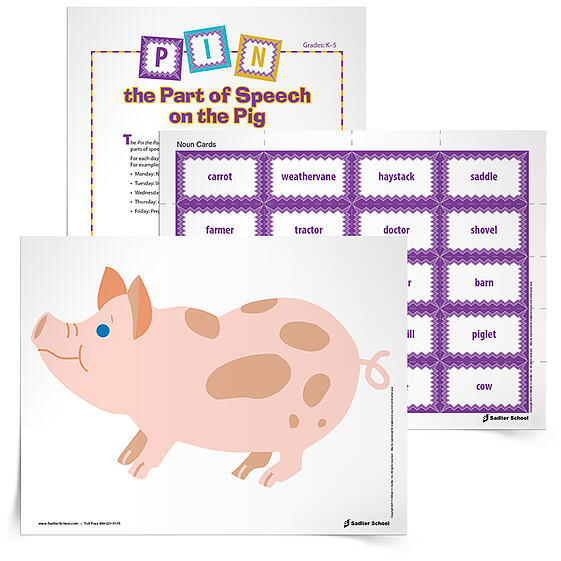 Sometimes teachers tend to overthink things when trying to come up with creative ways to teach parts of speech...especially in the middle and upper grade levels! The Shamrock Memory Card Game is a simple activity that will engage students in learning or reviewing parts of speech.

Despite being created a couple years ago for the month of March, I use this game year round! Download the Shamrock Memory Card Game now.

Objective: Match parts of speech with an example of that part of speech. Like all memory games, the goal is to have paired the most cards when the round ends.

How to use in the classroom: Decide whether you want students to play individually or in two small groups. Display the 48 cards face down. Choose who will go first. The first person or group will turn one card face-up. They will either see the part of speech or a word. Then turn over a second card. The card must match the first card with the correct part of speech or a word. For example, if a student turns over a card with "noun" on it and then turns over a second card with the word "leprechaun", the cards match! If the cards match, the student(s) gets to go again. The student or group with the most pair of cards at the end wins the round. 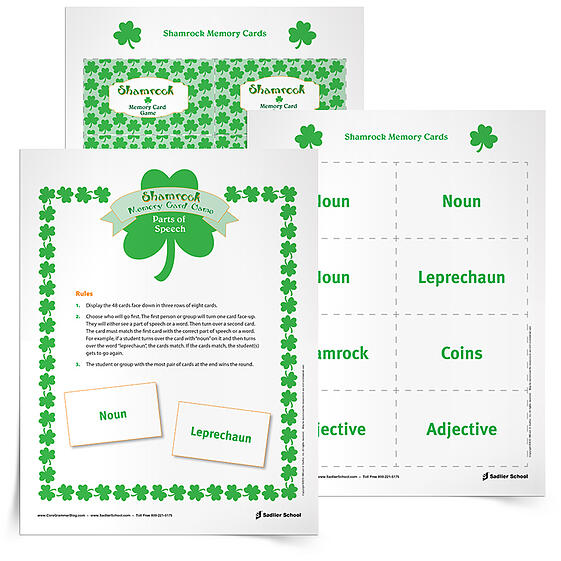 RESOURCE: Identifying Parts of Speech in a Complex Text Lesson

This next activity is not the most creative way to teach parts of speech, but it is effective! The Identifying Parts of Speech in a Complex Text Lesson has students read a complex text and then identify various parts of speech.

How to use in the classroom: Handout the text excerpt to each students. Tell them their purpose for reading the text is to identify and circle the nouns that act as subjects in each sentence. Also, ask students to underline all pronouns and put a box around all interjections. 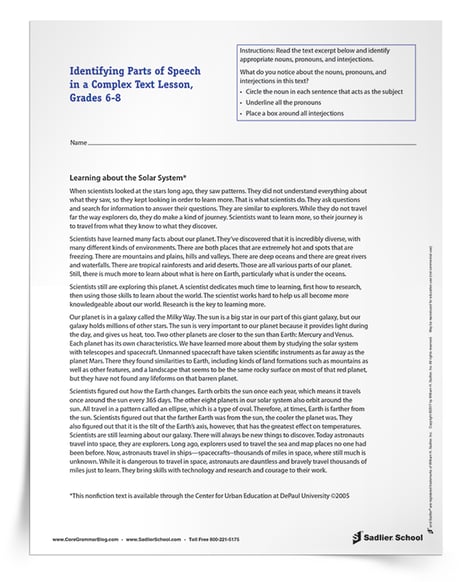 Teaching Parts of Speech in the High School Grades

By the time students enter high school, the focus shifts from isolated parts to speech to more complete understanding about the way sentences work. For grades 9-10, state standards require students use various types of phrases, including noun, verb, adjectival, adverbial, participial, prepositional, and absolute. Students should also use clauses such as independent or dependent; and noun, relative, and adverbial to convey specific meanings and add variety and interest to their writing.

Teachers can use a combination of hands-on activities and individual work to assess students’ knowledge of language. Students will build on the basic parts of speech they learned in the middle grades by understanding irregular verb forms, verb tenses, plural forms of words, reflexive pronouns, and dependent clauses.

Creative Ways to Teach Parts of Speech In High School

The use of sports in the classroom is a creative way to teach parts of speech and engage young people! With the Baseball Grammar Game students will get students moving, writing, and identifying parts of speech.

Objective: Teams of students will participate in a classroom baseball game that requires they complete a writing prompt and correctly identify parts of speech.

How to use in the classroom: Prior to playing the game, students will write short essays based on a writing prompt provided by you, the teacher. Some examples of a writing prompt are: Describe your favorite outdoor activity or What is the best part of going to a baseball game?  The essay should be short, perhaps 5-10 sentences. Have students write each sentence of their essay on the Baseball Writing Activity Sheet provided in the Baseball Grammar Game download. These papers will be wadded up and become your "baseballs."

The teacher will divide the class into two teams and assign each person a position. Each team needs the following position players: pitcher, catcher, first baseman, second baseman, shortstop, third baseman, left fielder, center fielder, and right fielder. All position players will play the field and have a turn at bat. If you have extra students, use a rotation system after each batter or each strike-out. Students can also be “bat boys or girls”, scorekeepers, or baseball handlers.

The baseball handler tosses the first baseball to the pitcher who pitches it to the batter.

The teacher will ask the student a question about the sentence. To get a “hit” and advance to first base, the batter answers the question correctly. (It is not important that the batter catches the ball, only that their answer is stated correctly). If the batter gets the question incorrect, it is an out.

The rotation continues until there are three outs for the team. After three outs, the teams switch sides. Have the scorekeeper keep track of runs and outs. 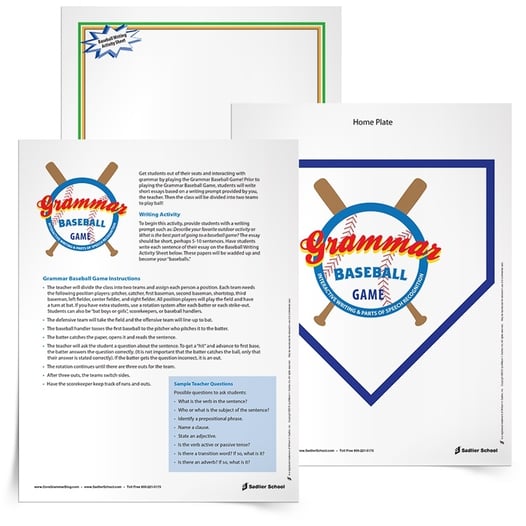 Hopscotch is a game whose origins date back to Roman times. If you give the traditional game of hopscotch a grammar twist you end up with a creative way to teach parts of speech. For the parts of speech key with definitions and examples, download the Hopscotch Parts of Speech Activity!

Objective: Give an example of the part of speech.

To begin, write the parts of speech into each square. Students will toss the marker onto a square, then the student should give the example word, phrase, or sentence If correct, the student should hop onto the board. If incorrect, the student goes to the back of the line. The stone is left on the square where the student last got the correct answer. Depending on the size of your class, there might need to be several hopscotch boards so 4-5 students can play at once.

If correct, the student who tossed the marker will complete the hops on the board. The person who answered correctly will toss next. This process will be repeated until the game ends.

If the person answers incorrectly, the person who answered will go to the back of the line and the next person will answer. This process will continue until the answer is correct.

If the weather is not nice, the hopscotch board can be designed on the classroom floor with duct tape. 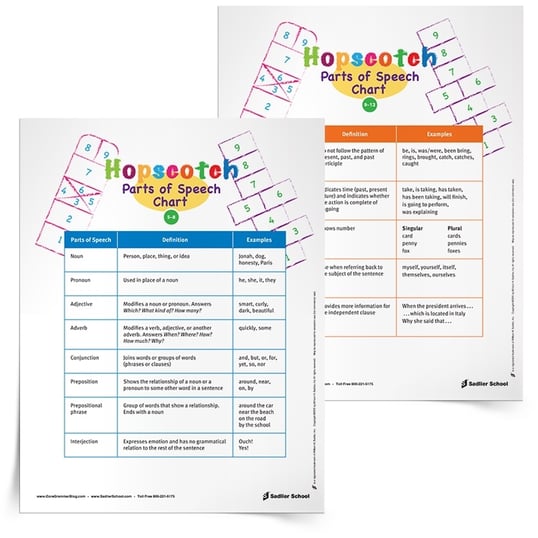 These creative ways to teach parts of speech are sure to engage middle school and high school students! These printable resources allow students to move while learning and reinforce their understanding of different parts of speech.

In addition, I outlined eight parts of speech that every middle and high school student should know and understand. Students need to be able to construct quality sentences that communicate information accurately and clearly. Understanding basic parts of speech is the first step to build effective communication.