Yesterday I realized I could tweak one of my favorite games to play in college for classroom vocabulary instruction! 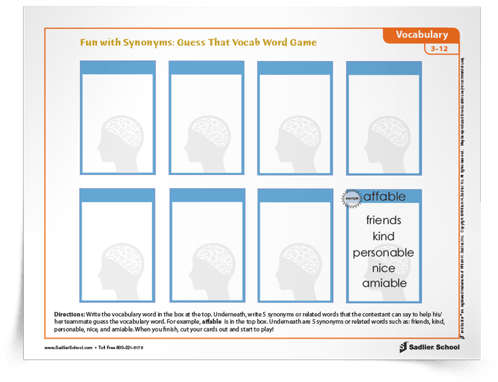 1. Decide how many students should play in a group (I would suggest 4-8 students).

2. Have students move to their assigned groups.

3. Have students number themselves off in each group.

-Assign the “number 1” group member in each group to create cards for the first 10 vocabulary words.

4. Have students refer to the directions on their notecard template when creating their Banned Words cards.

5. Once all students have completed all their cards, have them each cut out all of their Banned Words cards.  Have the leader of each group collect all the cards, shuffle them thoroughly, then hand the stack to the team member going first.  Also have a member of each group serve as timekeeper by using a timer you give them (or have them use a cell phone timer) to give each person the same time limit.  Students can “beep” players simply by saying “beep” rather than by having an electronic device.

The rules of Banned Words in a nutshell:

In each group, students form two teams.  Students sit in a circle, alternating players from team 1 and team 2.  A contestant from the opposing side watches as the contestant who is “on” looks at a Banned Words card and attempts to explain what the word is without using any of the “Banned Words” listed on the card.  Should they use a “banned” word, the opposing player says “beep”, the team does not get the point, and the contestant moves on to the next word.