Debates are a fun activity that demands students use a variety of literacy skills. In this article, you'll find a classroom debate lesson plan that is inspired by my love of March Madness. Plus, I've made the March Madness Debate Lesson Plan into a FREE printable for teachers! Grab it now.

Debates are a great tool for engaging students and adding some excitement to the classroom curriculum. A debate is a discussion in which participants articulate and justify their position on an issue. Teachers should have students participate in a classroom debate multiple times throughout the semester because they encourage students to:

With the March Madness classroom debate lesson plan, students will get in on the bracket battle fun! Students will participate in a series of debate activities with their classmates (or other classes in their grade level). The winners of each debate will move down a bracket system until only two teams remain. Once teams are knocked out of the debate tournament, students can act as newspaper columnists reporting on the debates. The winning team of the final debate challenge will be the champions! 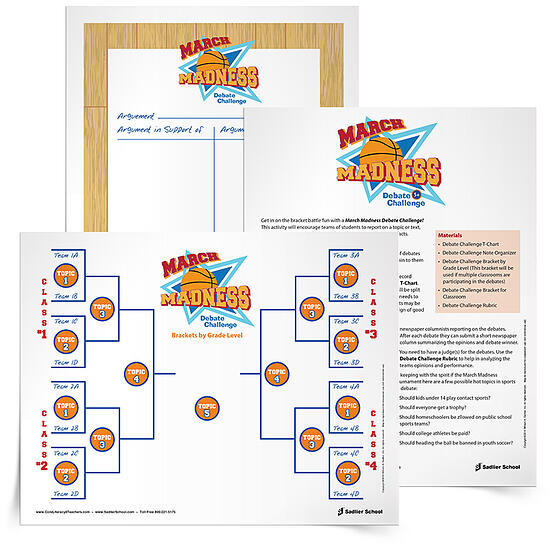 How the Classroom Debate Activities Work

Tell students that they are going to be participating in a series of debates with their classmates (or other classes in their grade level). Explain to them that a debate is when you look at both sides of an argument.

Let them know they will be given a topic to research. They will record arguments in support of and opposing on a Debate Challenge T-Chart (included in the download). Tell the students that based on their stance on the argument they will be split up into several teams. Give them advanced warning that there needs to be enough people in support of and opposing, so some students may be arguing the opposite of what they believe (let them know the sign of a good debater is someone that can do that successfully).

In keeping with the spirit of the March Madness tournament here are a few possible topics in sports to debate:

After the research is complete and the teams are set, students will prepare their notes for the debate using the Debate Challenge Note Organizer (included in the download). Remind students that they will want all of their notes with them when the debate takes place. Their notes should include:

1. An overview of their topic and opening statement

2. Three facts in support of their opinion

3. Three questions for the opposition

There are several decisions you will need to make based on your class, grade level, and if you will have any colleagues available to help you monitor the debates.

Download the free March Madness Debate Lesson Plan for your classroom. Everything you need to implement the various debate activities in your classroom is included in my downloadable bundle!