So often, teachers tell students to figure out what a word means based on its word parts or on surrounding context clues, but rarely know how to elaborate on that idea and teach concrete strategies to students. In this article, we'll explore strategies for breaking down word parts that can be easily understood by students. More importantly, these strategies to figure out what a word means will help students increase vocabulary and become better test takers. A total win! Plus, I've compiled free printable resources that you can download today and share with students.

What Is A Context Clue In Reading?

The context of a word is the printed text of which that word is part. When reading a text, the context is often understood from the words, sentences, and ideas that come before and after a word.

Readers might find a clue in the immediate or adjoining sentence or phrase in which the word appears; in the topic or subject matter of the passage; or in the physical features of a page itself (i.e., images, graphs, captions, and so on).

Essentially, context clues are bits of information in a text that, when combined with prior knowledge, can help the reader determine the meaning of an unknown word.

When students can effectively use context clues strategies to navigate a text, it leads them to academic success. With this skill students continue to increase their vocabulary, activate prior knowledge, and improve reading comprehension and fluency.

Being able to successfully interpret context clues also makes students better test takers. Coming across unfamiliar vocabulary on a standardized test not only confuses students, but also can be very discouraging. If students don’t feel confident about what they’re being asked, they won’t be confident when choosing an answer.

3 Ways Students Can Figure Out The Meaning Of Words

There are four common types of context clues that authors use when writing a text. They include:

Example: A hippogriff is a mythical creature what has the front half of an eagle and the hind half of a horse.

Example: Santa Claus was so portly that his doctor declared him overweight.

Example: The gorilla is often gentle, but it can also be ferocious.

Example: Constellations, like the famous group of stars named Orion, can be seen throughout the world.

By labeling the context clues according to their specific type, rather than simply saying they are “clues,” teachers can help students who are confused by generalities to more easily look for restatements, contrasts, inferences, and so on.

The Sadlier Context Clue handout that provides handy tips for finding the three basic types of context clues is especially helpful in developing these skills. When I explain that students should look for restatement clues, contrast clues, and inference clues, we can then re-examine passages, underline key words and phrases, and discuss what types of clues they are. 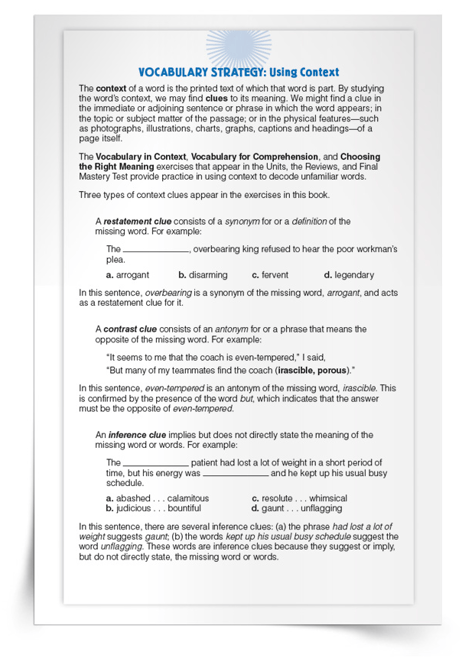 Strategy 3: Break the Word Down

The last strategy/handout available for download comes from the Core Literacy Blog. This simple handout focuses more on breaking down individual words and puzzling out their meanings. Here's an example Erin gave using the word submersible:

STEP 1: Break the word into smaller parts. Look for the parts of the word you know.

What does the word sub make you think of?

You can investigate even further by asking, “Do subways and submarines have anything in common?”

STEP 2: Look for the context clues. What do they tell you?

"Explorer, the submersible watercraft, sank deeper into the ocean.”

From the passage clues we know that:

STEP 3: Use your background knowledge.

I know a sub or submarine travels underwater.

The passage says, "...sank deeper into the ocean."

You can conclude that submersible means a vessel or vehicle that is capable of traveling and operating underwater.

This example is a great resource to share with students as a handout or you can hang up the poster on the classroom wall. Once students have reviewed this strategy, assign them words to break down themselves using these three steps. 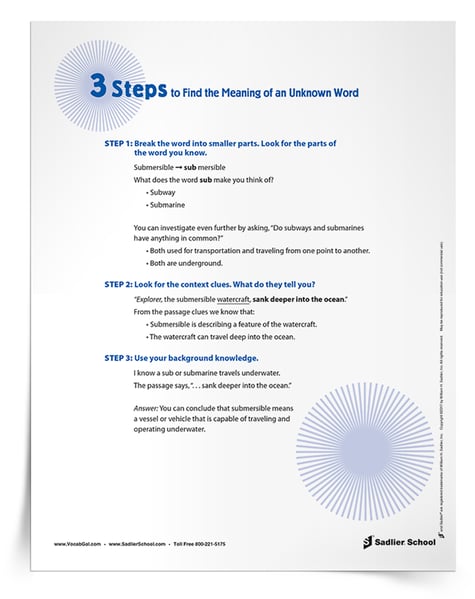 By using these handouts together, students can see that solving word mysteries can be a fun challenge, rather than an overwhelming task. Using these strategies will bring students success when they encounter new words on tests.