“The Isle of the Lost” – Compare and Contrast Characters Activity

A unit that focuses on studying characters is one of my favorites. I enjoying teaching characters because it always seems to build my students’ love for reading. This year I’ve had amazing success teaching students to compare and contrast characters using The Isle of the Lost, by Melissa De La Cruz.

If you aren’t familiar with this book, scroll to the bottom of this post to read a description.

You can use The Isle of the Lost in a variety of ways with your students. It can be used in small, guided reading groups or book clubs, for independent reading, or as a great read-aloud. My favorite way to use this book is to compare and contrast characters.

The English Language Arts standard requires students to compare and contrast two or more characters, settings, or events in a story or drama, drawing on specific details in the text.

Once you’ve reviewed characterization with students, pass out The Isle of the Lost Character Trait Worksheet. Have students use this worksheet to look at the words, actions, and motives of each of the main characters. Students should also take note of the characters’ similarities and differences. Each character in The Isle of the Lost is unique in his or her own special way, but what all the main characters have in common is the influence that their evil parents have on them and the feeling of being a disappointment in their parents' eyes. 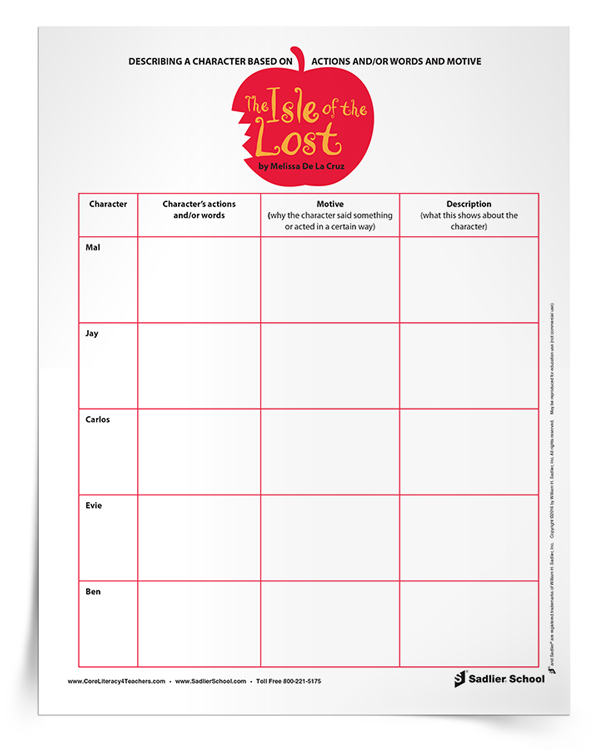 Once students have completed The Isle of the Lost Character Trait Worksheet , have them make posters describing and comparing the characters.

My students have made wonderful posters using their character trait worksheets. After their poster project, many students were even inspired to start reading the whole Descendants series.

Description of The Isle of the Lost

Twenty years ago, all the evil villains were banished from the kingdom of Auradon to the Isle of the Lost — a dark and dreary place protected by a force field that makes it impossible for them to leave. Stripped of their magical powers, the villains now live in total isolation, forgotten by the world.

Mal learns from her mother, Maleficent, that the key to true darkness, the Dragon's Eye, is located inside Maleficent’s scepter in the forbidden fortress on the far side of the island. The Eye is cursed, and whoever retrieves it will be knocked into a deep sleep for a thousand years. But Mal has a plan to capture it. She'll just need a little help from her “friends.” In their quest for the Dragon's Eye, these four kids begin to realize that just because you come from an evil family tree, being good isn’t so bad.