Feast Days provide catechists and parents with a wonderful opportunity to introduce children to Catholic saints. In this article, you’ll discover a short biography and free printable primary and intermediate activities that can be used to learn more about a popular saint for kids, Andrew Kim Taegŏn! Whether at home or in the classroom, these resources will help children celebrate the life and feast day of Saint Andrew Kim Taegŏn. 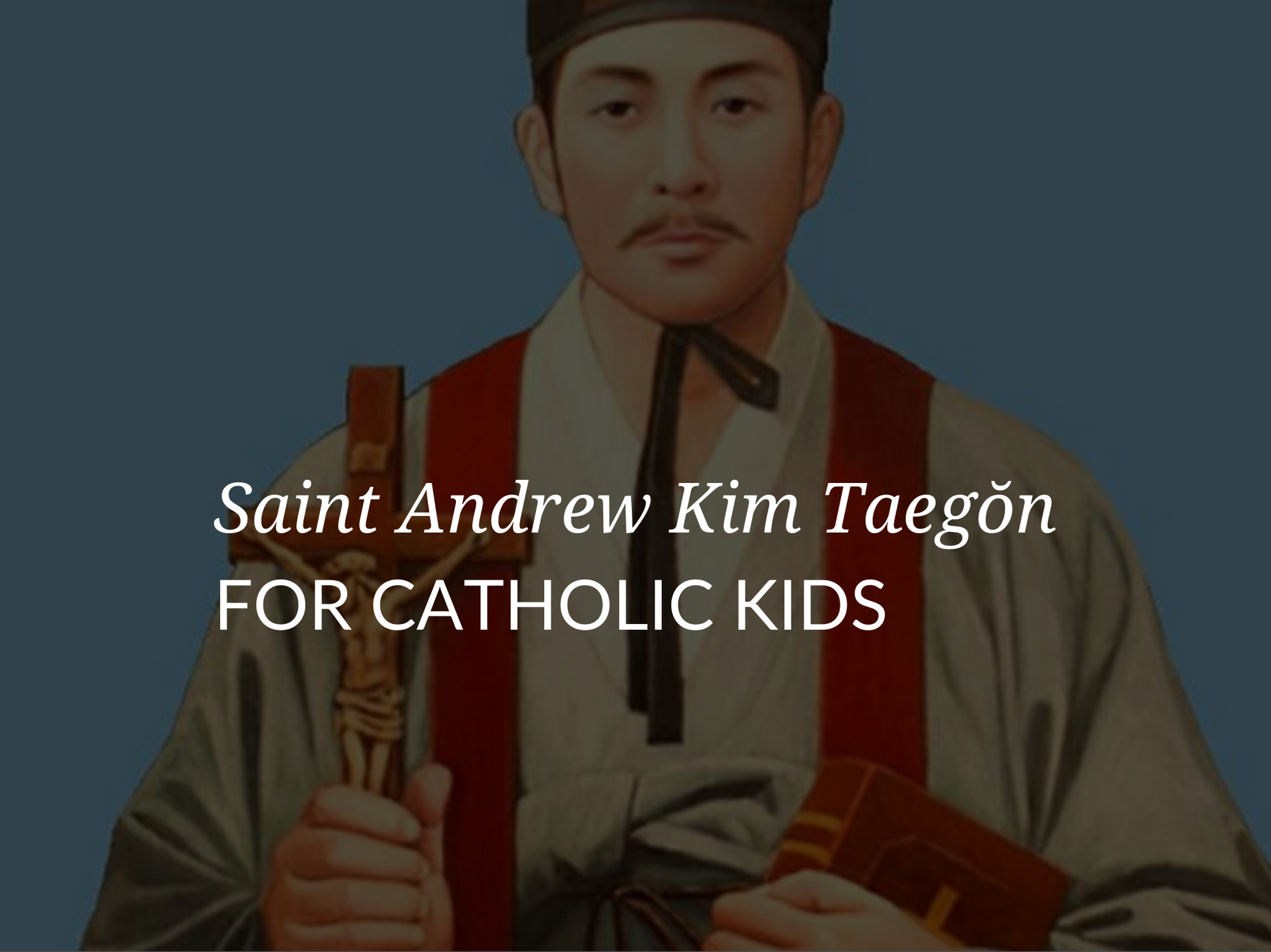 On September 20, the Church celebrates the feat day of Saint Andrew Kim Taegŏn, who said, "Whatever happens, behave in such a way that God will be glorified. . .Be steadfast, and let us meet in Heaven." 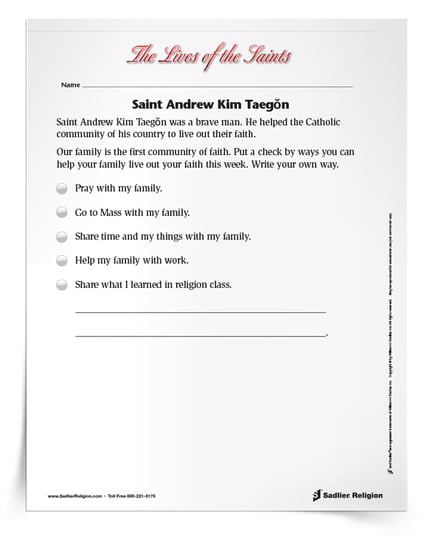 Andrew Kim Taegŏn was born on August 21, 1821 in Korea, at a time when it was against the law to practice the Catholic faith there. Catholics in Korea had to go to Mass and learn about Jesus Christ secretly. Missionary priests from France traveled through the country in disguise!

During Andrew’s life, many countries of Europe were trying to claim the resources of Asia. Asian rulers were suspicious of any ideas or advances brought from Europe. Since the Catholic faith was originally taught in Asia by European missionaries, it fell under suspicion as well, and the Church’s teachings were viewed as a threat to the power of Asian rulers.

The Catholic faith was brought to the country by Korean lay people. In China they learned about the teachings of Jesus Christ and were inspired by them. They began to practice the faith in Korea on their own. One man from this group was sent back to China to be baptized and to ask priests to come to Korea. They needed priests to celebrate the sacraments. When these missionaries arrived, they found that a strong and knowledgeable community of lay people already existed. This community remained faithful and even grew despite persecution that lasted almost 100 years!

Andrew Kim Taegŏn knew how important it was for Christians to support and encourage one another in their faith.

On August 17, 1845, Andrew Kim Taegŏn was the first native-born Korean to be ordained a priest. Back in Korea, Andrew began the dangerous work of ministering to the brave community. He spent much of his energy making it possible for other priests and catechists to enter Korea as well.

In June of the next year, Andrew was arrested and spent the next three months in prison. The  prison was very dirty and overcrowded, and the prisoners were mistreated. While in prison, Andrew wrote letters to his fellow Christians encouraging them to remain true to the faith in spite of the trials and danger facing them. On September 16, 1846, he was executed near Seoul, Korea. He was 26 years old.

In his homily on March 23, 2001 at the Inauguration of the Pontifical Korean college in Rome, Pope John Paul II recalled what Andrew was said to have said to his fellow prisoners while he was imprisoned himself: "Do not let misfortunes frighten you", he begged them; "do not lose heart and do not shrink from serving God, but, following in the footsteps of the saints, promote the glory of his Church and show yourselves true soldiers and subjects of God. Even if you are many, be of one heart; always remember charity; support and help one another, and wait for the moment when God will have mercy on you.” (Homily of John Paul II, March 23, 2001)

Andrew Kim Taegŏn was canonized along with 102 Catholics by Pope John Paul II when he visited Korea in 1994. This group included Paul Chong Hasang, 98 Koreans, and three French missionaries who had been martyred between 1839 and 1867. This group of people included some bishops and priests but were mostly laypeople.

Andrew Kim Taegŏn knew how important it was for Christians to support and encourage one another in their faith.  During his ministry as a priest, he lived in constant danger. He showed his bravery as well as his concern for others, however, by writing letters to encourage them and assure them of his prayers. Like Andrew Kim Taegŏn, we can offer help to one another in living our faith!

Download a primary activity or intermediate activity to celebrate Saint Andrew Kim Taegŏn’s feast day on September 20! These activities will encourage children to consider ways they can help their families—their first communities of faith—live out their faith.