Celebrate the Feast Day of St Teresa of Calcutta with Kids 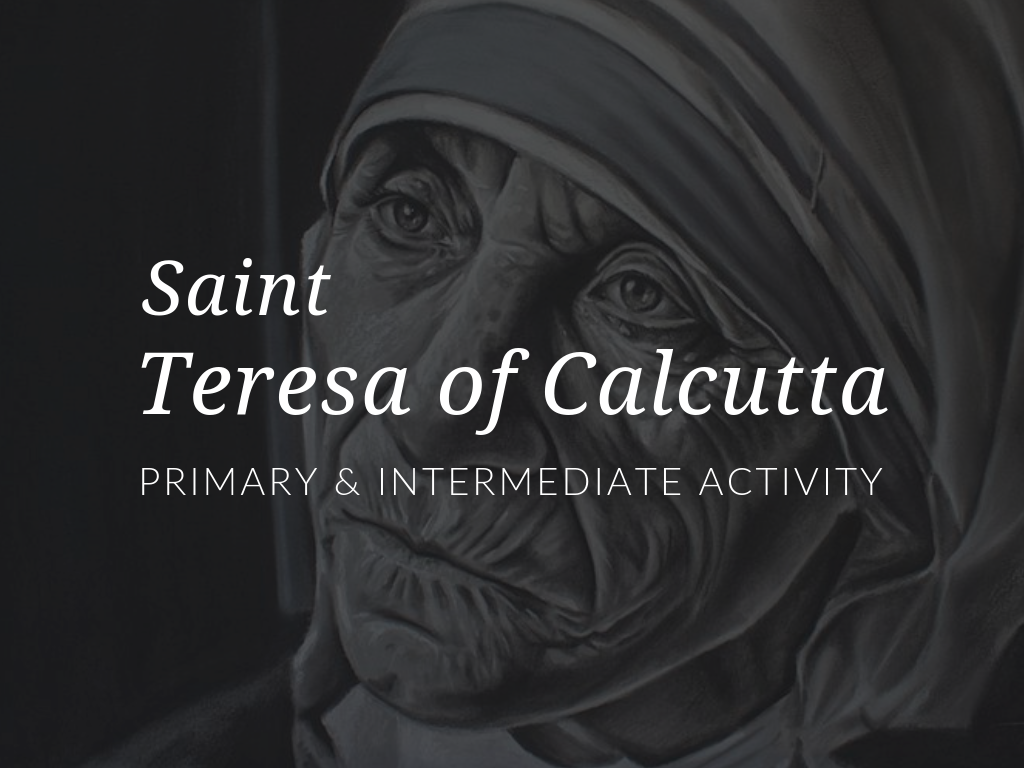 Teaching Children About the Life of Saint Teresa of Calcutta

Your students can learn more about the fascinating life and work of Saint Mother Teresa of Calcutta at Sadlier’s Lives of the Saints. Each Saint profile features a biography, a description of the world at the time the saint lived, and a meaningful quote. Students will also find a reflection of what each saint means to us today. Catechists can be assured that these biographies are always developmentally appropriate, even for the primary-grade learner.

Mother Teresa was born was born in a city call Skpoje, located in Macedonia, in the Balkan Peninsula in southeastern Europe. Her parents called her Agnes. When Agnes was just twelve, she realized God was calling her to become a missionary. She read all the stories she could find about the work of Catholic missionaries around the world. And she studied geography to learn about the lands where missionaries worked.

When Agnes was eighteen years old, she joined the Sisters of Loreto. The Sisters of Loreto are a community of Irish sisters who did missionary work in India. She traveled first to Ireland, where she began her studies. Then she was sent to India in 1929. At the time, India was part of the British Empire and was ruled by England. In 1947, India gained its independence thanks to the work of Mohandas Gandhi and others. India was then divided into two nations, India and Pakistan. In 1971 East Pakistan became the independent nation of Bangladesh. Today the nation of India is the world's largest liberal democracy. In India, Agnes took her first vows as a sister. She chose Teresa as her religious name in honor of Saint Teresa of Ávila and Saint Thérèse of Lisieux.

From the time she first arrived in India until 1948, Mother Teresa was a teacher. She taught at Saint Mary's High School in Calcutta. Many of the students at the school were girls from wealthy families. But the city of Calcutta was very large, and many people who lived there were very poor. Day after day, Mother Teresa saw the difficult lives of Calcutta's poor people. She wanted to help these poor people to live better lives.

In 1948 Pope Pius XII and Teresa's order allowed her to leave Saint Mary's and devote her life to caring for the homeless people on the streets of Calcutta. Teresa studied nursing so that she would be able to help the sick. She opened a school for Calcutta's poorest children. She stopped wearing the religious habit of the Sisters of Loreto. Instead she wore the clothes of a poor Indian woman: a plain cotton sari and sandals.

Mother Theresa said, "Yesterday is gone. Tomorrow has not yet come. We have only today. Let us begin." Today, the Missionaries of Charity—the order of religious sisters that Mother Teresa began in 1950—serve the poorest of the poor in countries around the world, from the streets of India to the streets of New York.

During her long life among the poor, Mother Teresa received many honors. One of these was the Nobel Peace Prize, which she received in 1979. When she died, her adopted country of India gave her a state funeral. The ceremonies were broadcast on television around the world. In 2003, only six years after her death, Mother Teresa was declared Blessed by Pope John Paul II. On September 4 2016, Mother Teresa was canonized a saint by Pope Francis.

Download a Saint Teresa of Calcutta Activity for primary and intermediate students to share with your students on September 5th. Activities are available in English and Spanish!

With the intermediate activity, students will answer questions inspired by Saint Teresa of Calcutta's service and care for the poor. 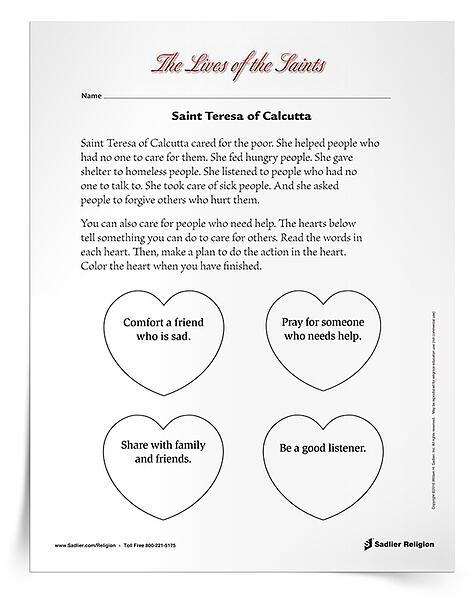 By Ariel Quiroz [CC BY 2.0  (https://creativecommons.org/licenses/by/2.0)], via Wikimedia Commons