Feast Days provide catechists and parents with a wonderful opportunity to introduce children to Catholic saints. In this article, you’ll discover a brief biography and free printable activity that can be used to learn more about a popular saint for kids, John Bosco! Whether at home or in the classroom, these resources will help Catholic children celebrate the feast day of Saint John Bosco. 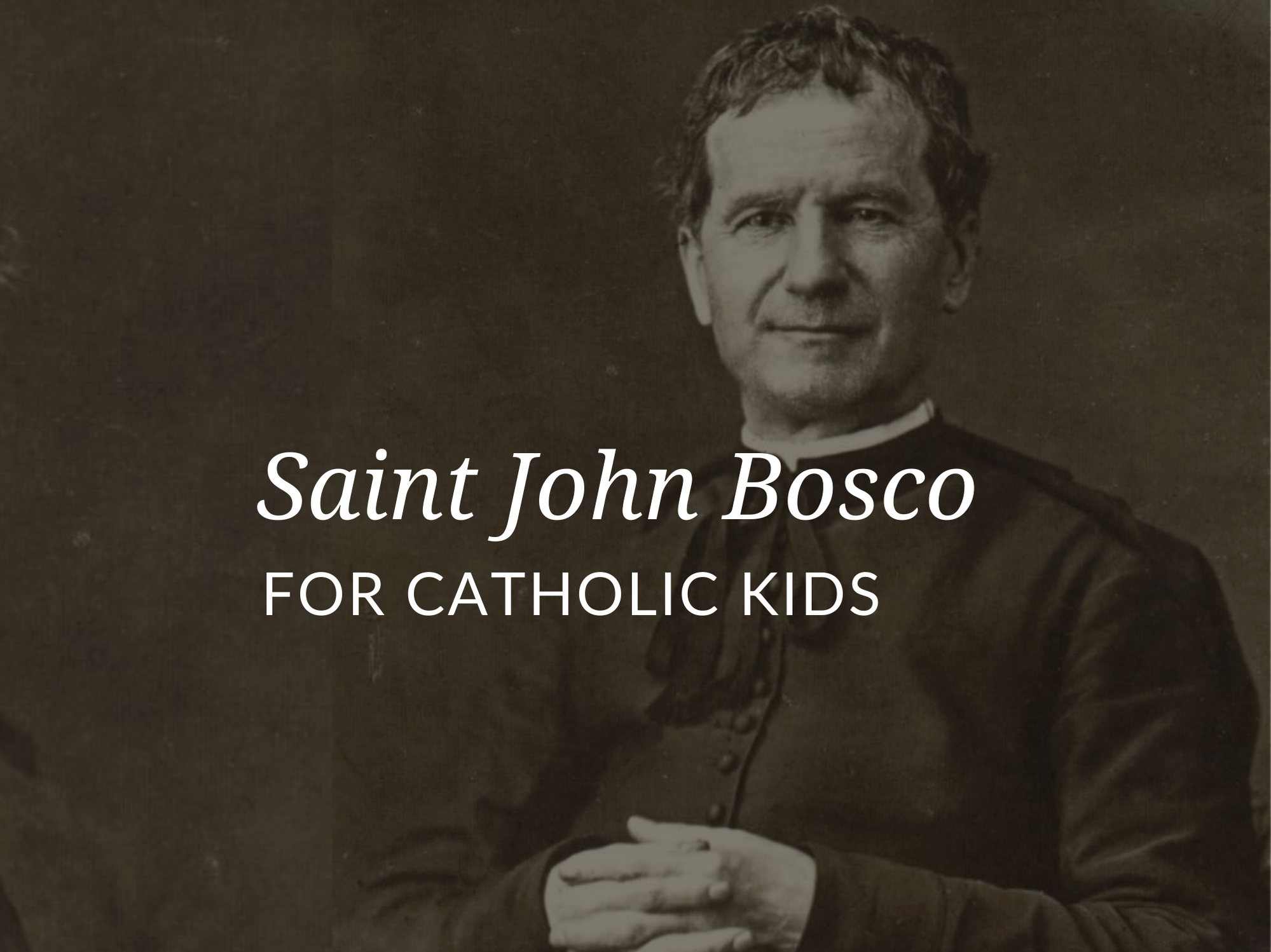 On January 31, the Church celebrates the feast day of Saint John Bosco, popularly known as  Don Bosco. Saint John Bosco is an Italian saint who was born in the year 1815.

Download a printable activity to share with Catholic kids on the feast day of Saint John Bosco. The activity invites children to reflect on ways that God has blessed them with talents, and ways that they can be shared with others. 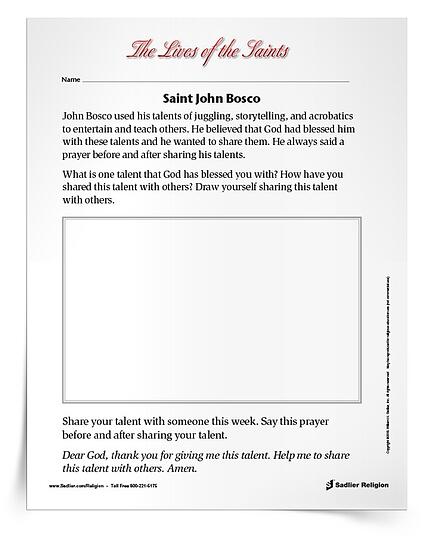 As a young boy, John Bosco dreamed of becoming a priest. This dream seemed impossible. His family was poor. John’s father had died when he was only two years old. He lived on a farm with his mother and two brothers. He helped care for the sheep, and this responsibility prevented him from attending school full time.

While he had to work hard, John had happiness and a great imagination. He learned how to juggle and do acrobatics from circus performers. He would often entertain others with his tricks. He began and ended each of his performances with a prayer.

Although he lacked education, John Bosco was taught to read and write by a priest who recognized his intelligence. Through the help of his mother, some kind neighbors, and money he earned doing various jobs, he was able to finish school and enter the seminary.

John’s lifelong service to young people was inspired by a meeting he had with a poor orphan in the city of Turin, Italy. As a seminarian, John spent his free time working with boys who were neglected and orphaned. He taught them religion, entertained them with his acrobatics, and told them stories that they could understand. He did not believe in punishment; he treated all with kindness and respect. John Bosco believed that God lived within each person he met, and he treated each person accordingly: with love.

John Bosco believed that God lived within each person he met, and he treated each person accordingly: with love.

At the age of twenty-six, John Bosco fulfilled his dream of becoming a priest. He wanted to continue his work with neglected boys. He started a boarding school where these boys could live and learn the skills needed to make a living.

John Bosco was a writer and wrote many letters and publications during his life. Like his work, his writing supported young people’s spirituality and his approach of using reason, religion, and kindness to educate and form young people in the faith.

In 1859, inspired by the example of Saint Francis de Sales, Don Bosco founded the Society of St. Francis de Sales, popularly known as the Salesians of Don Bosco. This order of priests was focused on befriending, helping and educating poor boys. The original group included 22 members, but by the time Don Bosco died in 1888, there were more than 1,000 in Europe and South America.

In 1872, John Bosco also co-founded an order for women, the Daughters of Mary, Help of Christians, with a friend, Saint Mary Mazzarello. This order is popularly known as the Salesian Sisters, and it is one of the largest Roman Catholic religious congregations of women. Like the Salesians of Don Bosco, the Salesian Sisters the sisters followed Don Bosco’s philosophy of education.

Today, the Salesians evangelize and educate young people, especially those who are poor and at risk, in the style of Don Bosco. The schools that John Bosco began are still in evidence today and have spread all over the world. The Salesians continue to operate these schools, carrying on John Bosco's philosophy of education. John Bosco believed in teaching the skills necessary to enable young people to get jobs. This is still a focus of his schools today.

Pope Francis thanked God for the gift of John Bosco during Mass on his feast day in 2019. He recalled that Don Bosco had the eyes and heart of a father and a teacher. He said, “Today, let us ask the Lord, through the intercession of Don Bosco, for the grace for our priests to be joyful: joyful so that they have the true sense of looking at things regarding pastoral ministry, the people of God with human eyes and with the eyes of God.” (Pope Francis, Mass at Casa Santa Marta, January 31, 2019)

John Bosco included God in everything he did. God was a part of his life when he was working, studying, playing, teaching, and juggling! Like John Bosco, we should include God in each moment of our lives. Download a primary activity in English or Spanish, and share it with students to learn about St John Bosco and celebrate his feast day!

"Do you want our Lord to give you many graces? Visit him often."