Feast Days provide catechists and parents with a wonderful opportunity to introduce children to Catholic saints. In this article, you’ll discover a short biography and free printable activity that can be used to learn more about a popular saint for kids, Philip Neri! Whether at home or in the classroom, these resources will help children celebrate the feast day of Saint Philip Neri.

On May 26th, the Church celebrates the Feast Day of Saint Philip Neri, who said, "Cheerfulness strengthens the heart and makes us persevere in a good life. Therefore the servant of God ought always be in good spirits."

Download a primary activity in English or Spanish to celebrate the Feast Day of Saint Philip Neri. 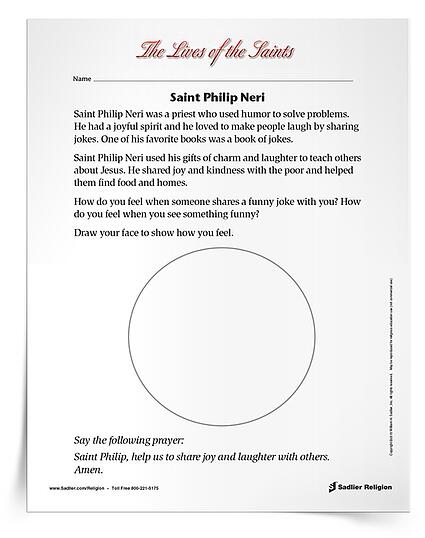 Philip Neri was born on July 22, 1515. He lived during the Renaissance, a resurgence of learning, affecting philosophical thought, science and art. This was also a time of great exploration of the world. His life and work coincided with the Protestant Reformation begun by Martin Luther. At a time when the Catholic Church was embattled in the Reformation, Philip Neri achieved a spiritual renewal in the Church’s capital city of Rome. He has been called both the “Apostle of Rome” and the “saint of joy.”

Philip was born in Florence, Italy. He had two sisters and a brother who died as a child. His parents were not wealthy. When he was eighteen years old, Philip's father sent him to live and work with a relative who was successful in business. While there, Philip would often go pray in the mountains. During this time in his life, he had a religious conversion. He decided to dedicate his life to God.

He went to live in Rome in 1533, where he was a tutor for a friend's son. While there, he studied theology, philosophy, and wrote poetry. After several years of study, he sold his books. He donated the money, and Philip started visiting the poor and caring for the sick. He ministered to people who lived in the streets, living a life of poverty himself.

Philip Neri was well-liked because he was gentle, kind, and had a warm personality. He had a wonderful sense of humor and used this gift when helping others.

He was well-liked because he was gentle, kind, and had a warm personality. He had a wonderful sense of humor and used this gift when helping others. His two favorite books were the Bible and a joke book. He used his gifts of charm and humor to teach others about Jesus. He shared joy and kindness with the poor and helped them find food and homes.

In 1544, Phlip Neri had a mystical experience while praying in the Catacombs of San Sebastian. A globe of fire miraculously entered his chest and enlarged his heart, breaking his ribs. This experience changed him for life.

Even before he became a priest in 1551, Philp Neri increased the faith of many He spent seventeen years serving as a layman in Rome before being officially ordained. Though he was well known for his cheerfulness, he was a serious preacher and a confessor.

As a priest, Phililp Neri began the Congregation of the Oratory in 1575. This group, dedicated to preaching and teaching, was also known as the Oratorians. The Oratorians are still active today. A famous Oratorian, Cardinal John Henry Newman, described the approach that Philip Neri employed in inspiring so many people from so many walks of life: “cor ad cor loquitor” or, in English, “heart speaks to heart.”

Philip died after a long illness, in May of 1595. The entire city of Rome mourned. Because of Philip, many people's faith was increased. Philip Neri was beatified in 1615 by Paul V and canonized in 1622 by Gregory XV.

Saint Philip Neri is remembered today. Pope John Paul II wrote of Philip Neri, “The loving figure of the ‘saint of joy’ even today still maintains intact that irresistible charm that he exercised on all those who drew near him to learn to know and experience the authentic sources of Christian joy. Leafing through the biography of St Philip, in fact, one is surprised and fascinated by the cheerful and relaxed method he used to educate, supporting each person with fraternal generosity and patience” (Letter of His Holiness John Paul II on the Occasion of the IV Centenary of the Death of St Philip Neri, October 7, 1994). Pope Francis also delivered a message marking the 500th anniversary of Saint Philip Neri’s birth. He called the saint, ““passionate proclaimer of the Word of God.”

Philip Neri also began a tradition that continues today. He organized and led walks to important Churches in the city. These walks included music, singing, and laughter and drew many people.. Through these little pilgrimages, people of all ages visited important churches in the city while they connected with each other and strengthened their faith.

Philip used humor to solve many problems and to help other people. We can follow his example and use joy and humor to help others. Download a primary activity in English or Spanish to celebrate the Feast Day of Saint Philip Neri.

Plus, learn about Saint Joan of Arc and Saint John Bosco!