Download saint activities and prayers appropriate for discussing diversity, discrimination, and social injustices with children in your faith formation or school program! 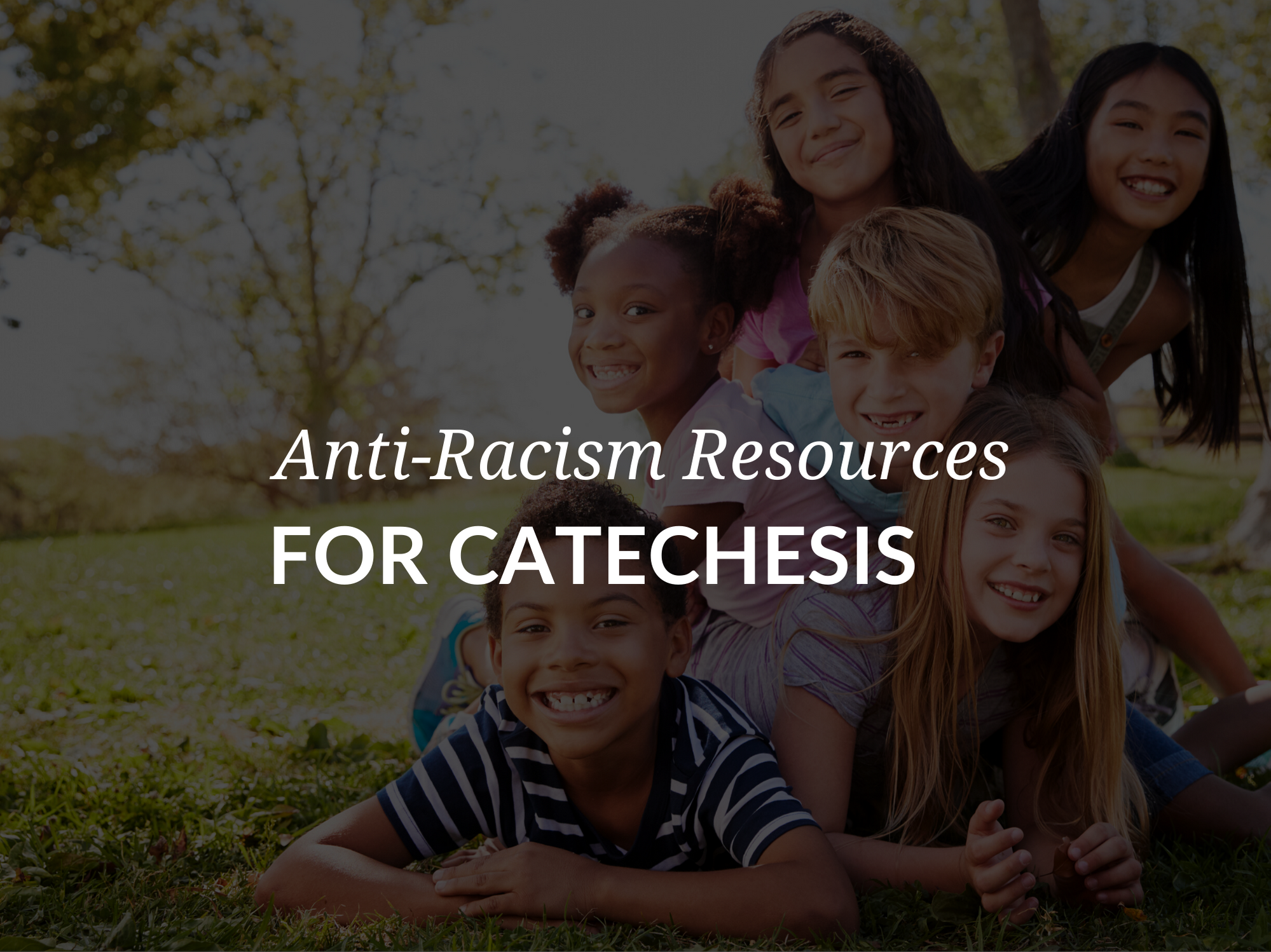 William H. Sadlier, Inc. stands in solidarity with those speaking out against racism and calling for social change. As a company and a collection of private individuals, we will not stand silent in the face of suffering among and injustice toward the Black community and all People of Color.

As a publisher, we recognize our responsibility to use the power of education to bring about positive change. We commit ourselves anew to that responsibility and to promoting a just society in which all persons are equally valued and respected.

Below are some of our free printable resources that support educational efforts for change.

Thea Bowman lived her life as a friend to Jesus. A granddaughter of slaves, Sister Thea Bowman was an African American woman who endured racism and inequality but who fought racial prejudice and promoted education and cultural awareness for those who were marginalized. he worked tirelessly to bring people together and lived her life as a disciple of Jesus Christ.

In May 2018, Sister Thea Bowman was declared a servant of God, a first step toward sainthood. Bishop Joseph Kopacz approved the cause of Sister Thea Bowman’s beatification and read his edict on the matter on November 18, 2018. U.S. Catholic bishops unanimously agreed to open a cause for canonization in November. The Ecclesiastic Tribunal must now carry out all the necessary steps to instruct this Diocesan inquiry into the beatification and canonization.

Teach students in your program about Sister Thea Bowman. Study her life and read about the path to sainthood. Then download and complete an activity designed to inspire children in the intermediate grades to unite people and break down barriers like Sister Thea Bowman. 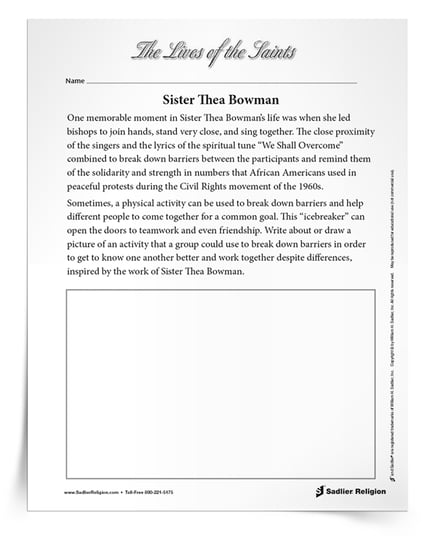 Continue celebrating the history and heritage of Black Catholics with the saints! Venerable Pierre Toussaint was born into slavery on the island of Haiti and died a free man in New York City.

Unlike many slaves, Pierre was taught to read and write. His master, Jean Berard, noticed Pierre's interest in learning and allowed him access to the family's extensive library. The Berards were Catholics, so Pierre was baptized and educated in the faith as well.

Despite lifelong discrimination, Pierre Toussaint had a successful business and did extensive charitable work. He chose to devote his life to the service of others. Pierre wanted everyone to experience the love of God through his kindness. Pope John Paul II said of Pierre: "He radiated a most serene and joyful faith, nourished daily by the Eucharist and visits to the Blessed Sacrament. In the face of constant, painful discrimination he understood, as few have understood, the meaning of the words, 'Father, forgive them; they do not know what they are doing.' No treasure is as uplifting and transforming as the light of faith."

Pope John Paul II said of Pierre: "In the face of constant, painful discrimination he understood, as few have understood, the meaning of the words, 'Father, forgive them; they do not know what they are doing.'" 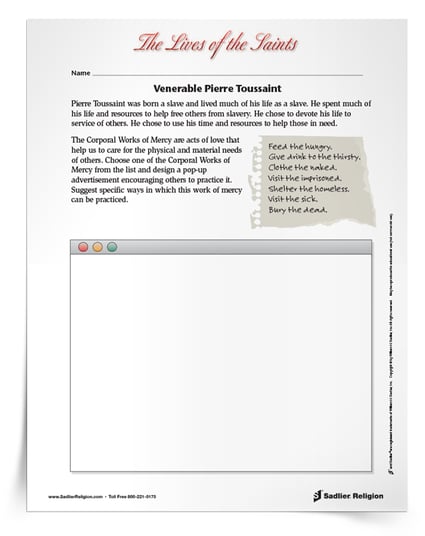 Teach children that people of all ethnicities have a long and vibrant history in the Catholic faith! Andrew Kim Taegŏn was born on August 21, 1821 in Korea, at a time when it was against the law to practice the Catholic faith there. Catholics in Korea had to go to Mass and learn about Jesus Christ secretly. Missionary priests from France traveled through the country in disguise!

On August 17, 1845, Andrew Kim Taegŏn was the first native-born Korean to be ordained a priest. Back in Korea, Andrew began the dangerous work of ministering to the brave community. Andrew Kim Taegŏn knew how important it was for Christians to support and encourage one another in their faith.  During his ministry as a priest, he lived in constant danger.

Download a primary activity or intermediate activity to celebrate the courageous life of Saint Andrew Kim Taegŏn with students. 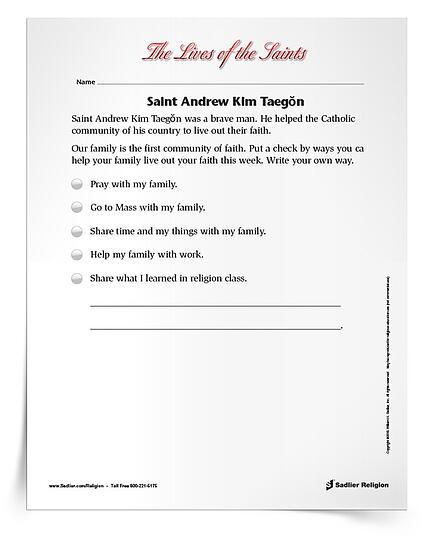 A disturbing rise in the news about racism, xenophobia, and other forms of discrimination and hate is a drag on the heart and soul. Treating each person with respect is one of the central themes of Catholic Social Teaching. We must eagerly embrace God's presence in and among all people! Use this prayer card as a way to strengthen your commitment this aspect of our faith and to share with others in your home or parish. 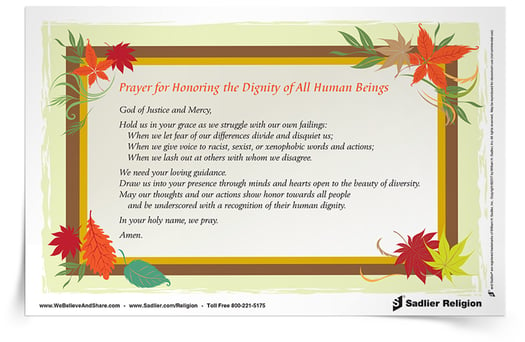 The late Cesar Chavez, a man who saw more than his share of injustice in his lifetime, once said we should not be discouraged by the lack of fairness in the world. By choosing to balance righteousness with mercy, to care less about being treated fairly and strive to embrace others with love, we bring justice into full flower. Then the beatitude will blossom in us: “Blessed are they who hunger and thirst for righteousness, for they will be satisfied.” (Matthew 5;6). Jesus promised that those who hunger and thirst for justice will be satisfied. Download this prayer card to reflect further on this beatitude and for ways to live justly. 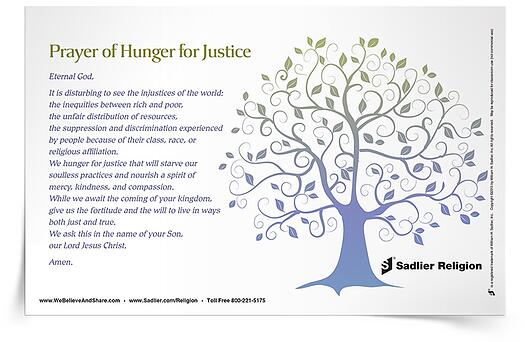 Of all the gifts of the Holy Spirit, understanding seems to be the most multi-leveled. It brings to mind a Russian nesting doll in which each one opens into another and another until we reach the smallest and yet most central place. The outermost shell is wrapped around the level of comprehension – those wonderful ah-ha moments in which the light dawns and the problem at hand suddenly becomes clear. At another level is the understanding between one person and another. At the center of understanding is the unfolding relationship with God. 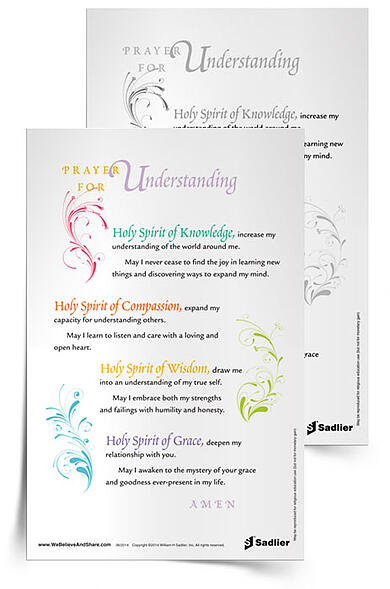 Catechesis cannot occur when teachers are unfamiliar with culture–their own and that of their students. Explore culture and catechesis with suggestions for implementation in class and at home. 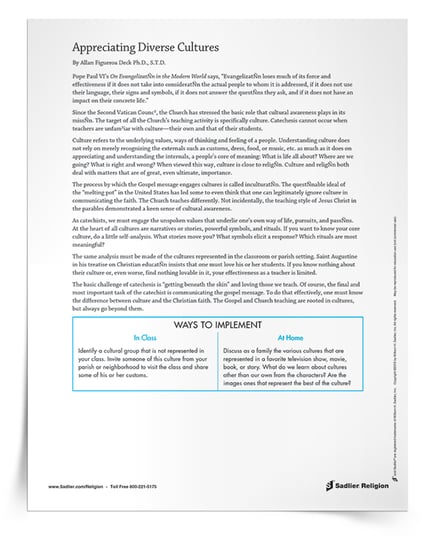