In May 2018, Sister Thea Bowman was declared a servant of God, a first step toward sainthood. Thea Bowman lived her life as a friend to Jesus. In this article, you'll find information and printable resources that can be shared in the religious education classroom to teach children about Sister Thea Bowman. Downloads are available in English and Spanish. 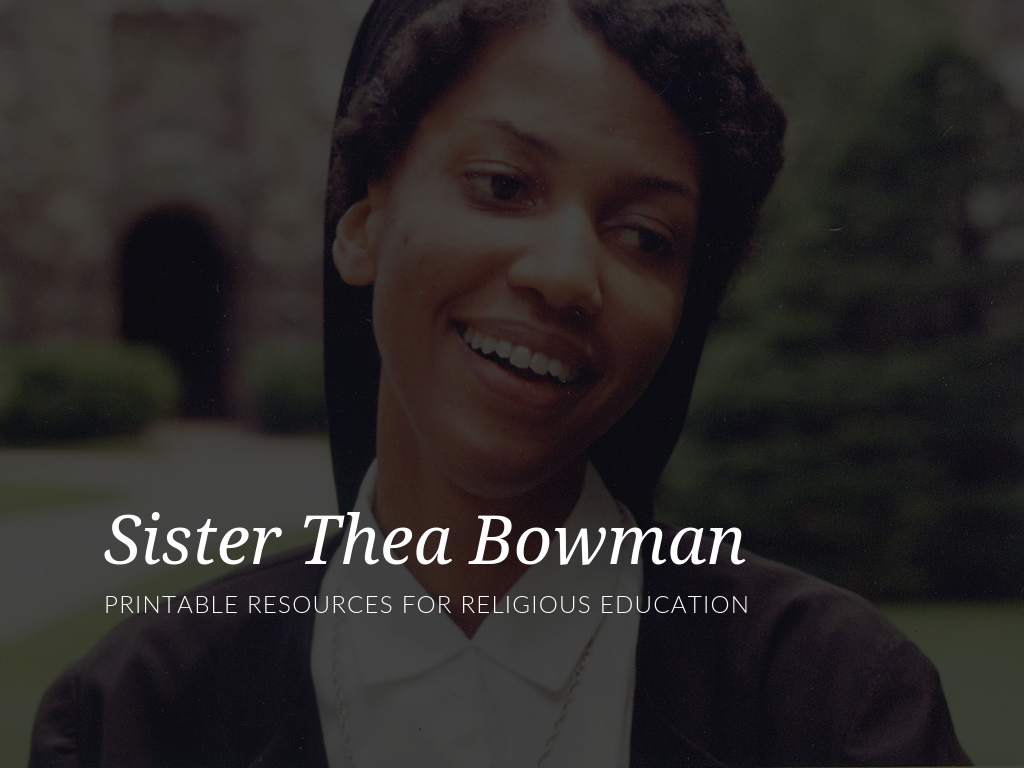 Who is Sister Thea Bowman?

Thea Bowman lived her life as a friend to Jesus. She was a celebrated scholar, a soulful singer, and is now on the path to sainthood. A granddaughter of slaves, Sister Thea Bowman was an African American woman who endured racism and inequality but who fought racial prejudice and promoted education and cultural awareness for those who were marginalized. She worked tirelessly to bring people together and lived her life as a disciple of Jesus Christ.

Download an intermediate activity to share with children about the life of Sister Thea Bowman. Activity available in English and Spanish. 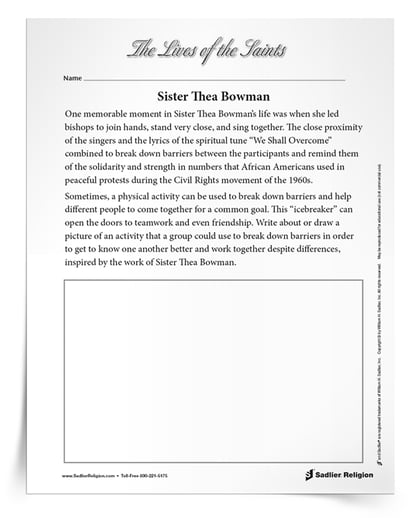 The Life of Thea Bowman

Thea Bowman, originally named Bertha, was born in 1937 in Yazoo City, Mississippi. Her parents, an older couple, soon moved to Canton, Mississippi, where Bertha grew up. Her community was an inspiration to her, and “exposed [her] to the richness of African American culture and spirituality, most especially the history, stories, songs, prayers, customs and traditions.”

From a young age, Thea was interested in finding a church home to belong to. Although she was raised as a Methodist and was baptized Episcopalian, young Thea felt most at home in the Catholic Church. In her autobiography Thea wrote, “Once I went to the Catholic Church, my wanderings ceased. I knew I had found that which I had been seeking."

“Once I went to the Catholic Church, my wanderings ceased. I knew I had found that which I had been seeking.” - Thea Bowman

Smiling Through Adversity and Working Towards Racial Integration

During her time as a sister in Wisconsin, Thea developed tuberculosis and spent the majority of 1955 in a sanatorium. But that was not the only challenge she faced. Thea was also one of a small minority of African Americans living in Wisconsin at the time. Her fellow sisters noted her positive attitude and cheerfulness while living in a time when and place where racism was prevalent.

As Sister Thea grew into her position as a nun, she began to advocate for racial integration in the Catholic Church. During graduate school at Catholic University of America, she shared with other students what it was like to grow up in the very racially charged town of Canton. She co-founded the National Black Sisters Conference at Catholic University of America. After receiving her doctorate in English, Thea went on to teach at Viterbo University in La Crosse, where she formed singing groups comprised of African American students.

In 1978, Sister Thea returned to her southern roots. She moved to Mississippi to help her ailing parents and to serve through speaking and singing ministries. She would later move to Louisiana to teach at Xavier University where helped found the Institute for Black Catholic Studies and taught for the remainder of her teaching career.

In 1984, Sister Thea’s parents both died shortly before she was diagnosed with breast cancer. Again, she faced her heartache and sadness with passion and positivity. Until her final breath on March 30, 1990, Thea Bowman continued to speak out about racial equality and inclusion of all races in the Catholic Church. She gave interviews, recorded songs, and helped create the hymnal “Lead Me, Guide Me.”

Bowman is credited with dedicating her life to the pursuit of civil rights and to the acceptance of African-Americans within the Catholic Church. Of all her accomplishments, Sister Thea humbly said that she hoped to be remembered as someone who tried: “I want people to remember that I tried to love the Lord and that I tried to love them.” She was buried in Memphis, Tennessee, next to her parents.

The Path to Sainthood

On November 18, 2018, Bishop Joseph Kopacz opened the formal investigation into Sister Thea Bowman’s cause for sainthood. Being named a saint in the Catholic Church is a very high honor. It means the saint’s name is added to the official catalogue of saints, and that Masses and feast days can be celebrated in his or her honor. Churches can then be dedicated in the saint’s memory, and his or her name can be used in public prayers, such as litanies. What does it take for someone to be named a saint?

The process of being named a saint is called canonization and it involves 4 major steps. Download the The 4 Steps of Canonization Faith Fact which summarizes the four steps below in a helpful handout that can be shared with children and adults. This resource is also available in Spanish. 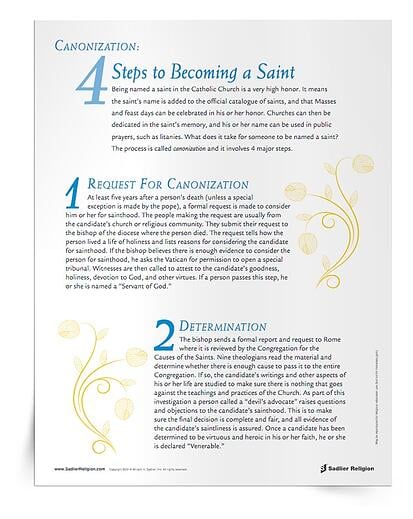 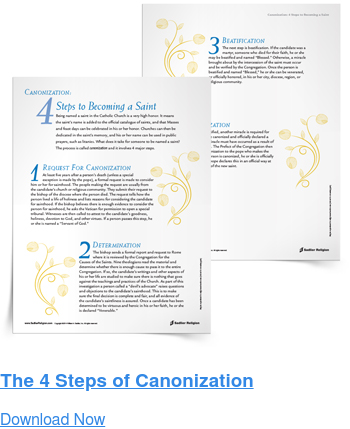 At least five years after a person’s death (unless a special exception is made by the pope), a formal request is made to consider him or her for sainthood. The people making the request are usually from the candidate’s church or religious community. They submit their request to the bishop of the diocese where the person died. The request tells how the person lived a life of holiness and lists reasons for considering the candidate for sainthood. If the bishop believes there is enough evidence to consider the person for sainthood, he asks the Vatican for permission to open a special tribunal. Witnesses are then called to attest to the candidate’s goodness, holiness, devotion to God, and other virtues. If a person passes this step, he or she is named a “Servant of God.”

The bishop sends a formal report and request to Rome where it is reviewed by the Congregation for the Causes of the Saints. Nine theologians read the material and determine whether there is enough cause to pass it to the entire Congregation. If so, the candidate’s writings and other aspects of his or her life are studied to make sure there is nothing that goes against the teachings and practices of the Church. As part of this investigation a person called a “devil’s advocate” raises questions and objections to the candidate’s sainthood. This is to make sure the final decision is complete and fair, and all evidence of the candidate’s saintliness is assured. Once a candidate has been determined to be virtuous and heroic in his or her faith, he or she is declared “Venerable.”

The third next step is beatification. If the candidate was a martyr, someone who died for their faith, he or she may be beatified and named “Blessed.” Otherwise, a miracle brought about by the intercession of the saint must occur and be verified by the Congregation. Once the person is beatified and named “Blessed,” he or she can be venerated, or officially honored, in his or her city, diocese, region, or religious community.

After being beatified, another miracle is required for the person to be canonized and officially declared a saint. Once again, the miracle must have occurred as a result of the person’s intercession. The Prefect of the Congregation then sends the cause for canonization to the pope who makes the final decision. Once a person is canonized, he or she is officially declared a “Saint.” The pope declares this in an official way at a special Mass in honor of the new saint.

One step towards the canonization of Sister Thea Bowman is to show evidence of a miracle that occurred because of Sister Thea. Some say that her first miracle was uniting a group of bishops from different walks of life at the United States Bishops’ conference in 1988.

Not only was Sister Thea the first African-American woman to address the conference, but she also moved participants to hold hands and sway together while singing a traditional spiritual song, “We Shall Overcome.” She was in a wheelchair as her body battled cancer, yet she confidently gave instructions to the bishops to cross their arms and grasp hands so that they were close enough to touch shoulders. She likened the closeness to Civil Rights protests, in which African Americans had to stand strong together against dogs, tear gas, tanks, and bullets. She noted that clergy members would stand in the frontlines, urging their people to stay strong and faithful.

In May 2018, Sister Thea Bowman was declared a servant of God, a first step toward sainthood. Bishop Joseph Kopacz approved the cause of Sister Thea Bowman’s beatification and read his edict on the matter on November 18, 2018. U.S. Catholic bishops unanimously agreed to open a cause for canonization in November. On October 21, 2019, a holy land tour benefiting the cause will begin. The Ecclesiastic Tribunal must now carry out all the necessary steps to instruct this Diocesan inquiry into the beatification and canonization.

Download an activity to inspire children in the intermediate grades to unite people and break down barriers like Sister Thea Bowman.