“Everybody wants to see justice done on somebody else.” Bruce Cockburn

When I taught fourth graders I quickly learned their mantra: “It’s not fair.” Being, as they were, in a stage of moral development prizing law and order, they were eager to make sure everything evened out. No wonder the parable of the Prodigal Son raised a few hackles among them. The brother’s indignant reaction to the father’s lavish welcome for his wayward son stung their sense of moral accountability.

Try cutting out the references to justice, righteousness (another word for justice), or fair treatment of the poor in the gospels and you would be left with a text full of holes. Jesus placed great emphasis on this virtue, to be sure, but not in the way we see it. Take the parable of the workers in the vineyard (Matthew 20:1-16). The owner of the vineyard paid those he hired late in the day the exact same wage as those who started at dawn. The day-long workers complained with the same logic as the fourth grader: “It’s not fair.” The owner reminded them of their agreement and how he held to the bargain struck with them. He also added that he was free to do with his money as he liked.

How, then, do we practice a virtue that, in Christian understanding, calls for the first to be last and the last to be first? One that teaches us to forgive those who seemingly don’t deserve it? Lest we fall into the trap of wanting justice done unto others, we need to recall the times we were treated “unfairly”, but in our favor. I know I can name numerous times when I received windfalls that were neither earned nor warranted. I have been the recipient of so many blessings, I should be constantly chanting prayers of gratitude. People have forgiven me for egregious behavior and overlooked some of my most annoying habits. I am grateful that justice according to Jesus prevailed.

The late Cesar Chavez, a man who saw more than his share of injustice in his lifetime, once said we should not be discouraged by the lack of fairness in the world. After all, God never promised a “…humane or even a just world. He gives us the gift of life and allows us to choose the way we will use our limited time on earth. It is an awesome opportunity.” By choosing to balance righteousness with mercy, to care less about being treated fairly and strive to embrace others with love, we bring justice into full flower. Then the beatitude will blossom in us: “Blessed are they who hunger and thirst for righteousness, for they will be satisfied.” (Matthew 5;6) 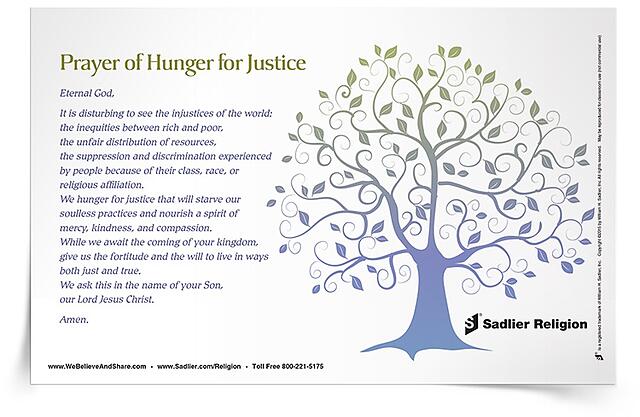