On March 17th, the Church celebrates the feast day of Saint Patrick. Patrick is a very popular Saint. People all over the world celebrate his feast day with parades, parties, and the wearing of green.

Patrick was born in Scotland in the year 347 ad. When he was about fourteen years old, he was captured and brought to Ireland. At this time, the people of Ireland did not know about Jesus. Ireland was not ruled by one single king, but by several Celtic chieftains. Each chieftain ruled a small piece of land but was always trying to get more land through force. Because of this unrest, not many people came to Ireland from England.

As a slave, Patrick was forced to take care of sheep. Patrick prayed often during his captivity. The people of Ireland at this time were not Christian. Patrick learned about their beliefs and practices. When Patrick was twenty years old, he escaped from slavery and returned home. However, he never forgot the people of Ireland and wanted to return to teach them about Christianity.

Patrick began studying for the priesthood and was eventually ordained a bishop. The Pope then sent him to Ireland as a missionary. Patrick became friends with several community leaders in Ireland. Because the people trusted him, many converted to Christianity. Patrick built over three hundred churches throughout Ireland and baptized thousands of people.

Patrick invited other priests and church leaders to join him in Ireland. He remained in Ireland for forty years, preaching, writing, and ministering to the people of Ireland.

There are many legends about Saint Patrick. One such legend has it that he used a shamrock, a plant growing in Ireland, to explain the Blessed Trinity. Just as there are three separate leaves on one plant, there are three distinct Persons in one God: the Father, the Son, and the Holy Spirit. Because of this, the shamrock is the traditional symbol of Ireland.

A Printable Activity for the Feast Day of Saint Patrick

After you’ve shared this story of Saint Patrick with your primary students, download and share the Saint Patrick Timeline Activity.

The activity asks children to chronologically order events in Saint Patrick’s life into a simple timeline using the information from this blog post.

You will need scissors and glue for each child to complete the activity. 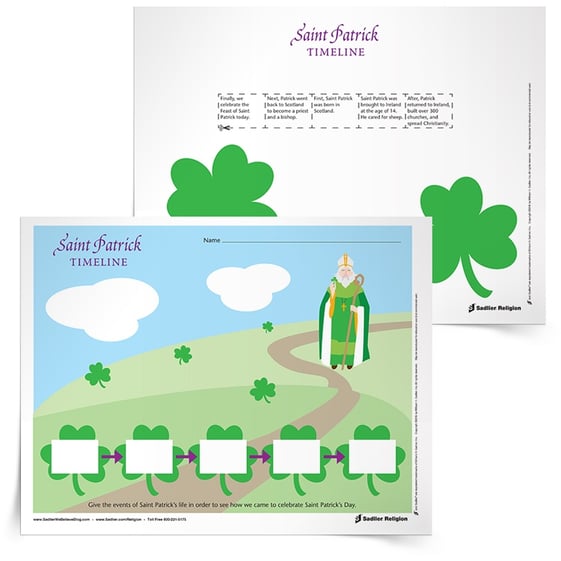 A Printable Prayer for the Feast of Saint Patrick

Saint Patrick's Breastplate is a prayer and hymn. Its original text was recorded in old Irish and is attributed to Saint Patrick and ministry in Ireland. Download and share a part of the prayer with the Saint Patrick’s Breastplate Prayer Card with your family or class. 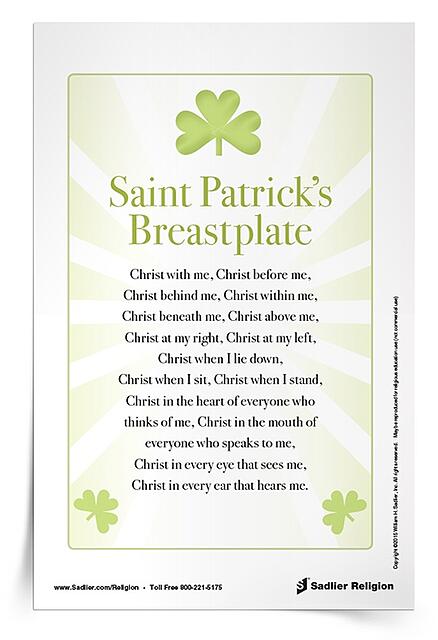 On March 19th, the Church celebrates the Feast Day of Saint Joseph. Joseph was the husband of Mary and the foster father of Jesus. A man of great compassion and great strength, Joseph strived to do the will of God, no matter what God asked of him.

Joseph was the husband of Mary and the foster father of Jesus. Joseph worked as a carpenter in the town of Nazareth. He was not wealthy even though Joseph's ancestor was King David, the greatest king of Israel.

Joseph was a man of great compassion. He was also a man of faith. Joseph strived to do the will of God, no matter what God asked of him. In a dream, an angel told Joseph the truth about Mary and the child she was carrying. Without questioning the angel, Joseph married Mary. The angel returned after Jesus had been born to warn him that he and his family were in danger. Again Joseph did not question what the angel told him, but took Mary and Jesus to a new country. He stayed with his family in Egypt until the angel let him know it was all right to return to Nazareth. Each year, Joseph took Mary and Jesus to celebrate Passover in Jerusalem. This was difficult for Joseph because of his work.

Joseph was a man of great compassion. He was also a man of faith. Joseph strived to do the will of God, no matter what God asked of him.

Joseph loved Jesus very much. He did his best to make sure that Jesus was safe and well cared for. Joseph was very worried when one day Jesus stayed behind in the temple and could not be found.

Joseph obeyed God throughout his whole life, even when he did not understand what was being asked of him. He remained strong in faith, believing that God would protect him; Joseph, in turn, protected and cared for Mary and Jesus.

A Printable Activity for the Feast of Saint Joseph

As a carpenter in the town of Nazareth, Joseph built things using wood. This download offers an activity for both primary aged students and intermediate students, both focused on the theme of “building.”

In the primary grades, the activity explains that like Saint Joseph, we can build things too. The primary activity challenges young students to plan and collaborate in order to build something using paper wooden blocks that they have designed.

The intermediate activity invites students to consider ways that we can build faith, hope, and love in ourselves and in others.

A Printable Prayer for the Feast Day of Saint Joseph

Joseph obeyed God, even when he did not understand what was being asked of him. Download and share this Prayer to Saint Joseph Prayer Card  with your family or class to facilitate a discussion about Saint Joseph and his remarkable faith. 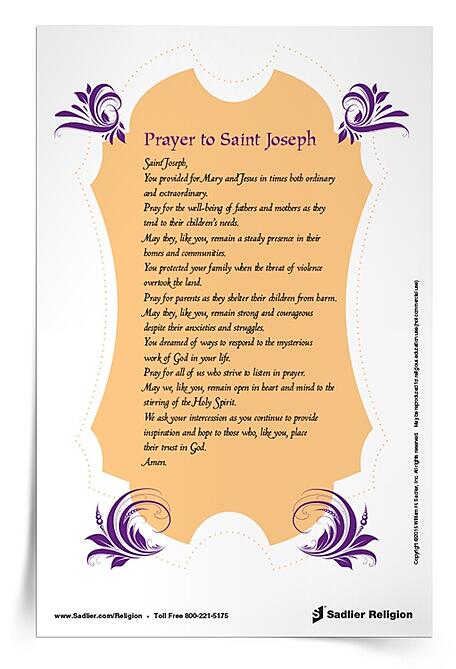