Welcome to our guest blogger, Sr. Maureen Sullivan, OP. The following article is an excerpt from a presentation she will be giving at the National Conference of Catechetical Leadership (NCCL) in Jacksonville, Florida, on May 22-26th. If you are attending the conference, be sure to stop by the Sadlier booth to meet Sister Maureen. 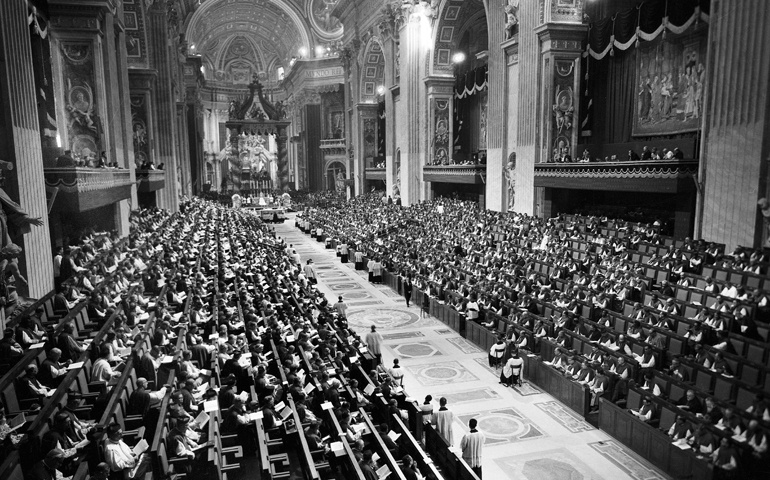 It would appear that the Roman Catholic Church has reached something of a turning point at this moment in our history. A careful reading of contemporary theological literature supports this claim. The statistics in this regard are disturbing, but I do not believe this is a cause for great alarm. I say this for three reasons. For one thing, there have been numerous turning points in our 2000 year old history. Secondly, these moments are always followed by a reform movement. Vatican II is an example of such a reform. When Pope John XXIII announced his Council, he told us that he was hoping for the Church to experience an aggiornamento…a renewal moment in our Church. Thirdly, and I believe most importantly, we have been given a promise from the Risen Christ that he would be with his Church until the end time. We are not alone on this journey. Still, for those of us engaged in the process of evangelization, there is no denying that this moment does cause concern.

It is quite interesting to find that fifty years after John’s Council we have another Pope – Francis – who is breathing life into the legacy of Vatican II. Francis has begun to do this in any number of faith-related topics today but I would like to focus on just one area…the relationship between the Gospel and culture – referred to as the concept of “inculturation.” This is not a new issue. It enjoyed a major role at Vatican II (1962-1965) and again with Pope John’s successor to the papacy, Pope Paul VI, who in 1975 wrote:“The split between the Gospel and culture is without a doubt the drama of our time….hence every effort must be made to bring about a full evangelization of culture or – more correctly – of cultures - which must be regenerated by an encounter with the Gospel.” Our current pope could have written these very same words. In fact…he frequently comes close to doing just that.

One of the mantras of the leading voices at the Second Vatican Council was the need to scrutinize “the signs of the times.” Pope Francis is doing this as well. He, along with other theologians today, has discovered the need to convince people that Christianity is meaningful and possible because what is becoming more and more apparent today is that there is a growing gap between faith and the practical, everyday life of believers. Francis believes that the Church needs to dialogue with the different elements in culture to create an effective way of bringing about a personal encounter with Christ. Not just words: Life!

Evangelizing means reaching down to the roots of cultures. In his discussion of this idea he uses a truly beautiful concept: the “Seeds of the Word.”  This term refers to whatever is true and holy in the realities in which we live, meaning that we live in a world of grace. The creative principle holds that something of a creator is left in the created – which is why we look like our parents. They left something of themselves in us. This is true for God the Creator as well. The presence of God can be found in all things, except sin. It is an expression of incarnational theology. Just as divinity entered the human condition in the person of Jesus of Nazareth, the power and the presence of God can be encountered in the world and in our different cultures. Because of this concept, we find in Francis an emphasis on concrete realities…this family, this parish, this culture. Such a mindset enables Francis to be in touch with the real life experiences of the people to whom he speaks and this ability is what makes Francis’ pastoral theology so authentic and so appealing. He speaks of these concrete realities as “spaces for grace.” We are called to have a personal encounter with Christ in a community of believers. Not just words: Life!

The evangelization of cultures, a mission with which each of us is involved, is an effort to understand the mentality and attitudes of the contemporary world and to shine the light of the Gospel on these cultures. And, in all of this – religious education must avoid the risk of becoming simply a “distributor of information.” For Francis, the goal of religious education is formation. Not just words: Life!

Perhaps if we emulated Francis, the disturbing statistics referred to earlier in this article would change. Like Francis, our goal is to have the Gospel touch the very lives of those to whom we minister. It must not be in the abstract…no, it must truly touch the very fiber of their beings, reaching down to the roots. Because only then can the human faith response be authentic. Not just words: Life!