May Feast Days– Catholic Saints to Celebrate with Children

Feast Days are a great opportunity to introduce students to Catholic saints. Teaching children about saints provides inspiring examples of discipleship and models for living out their faith. Use the activities in this article to celebrate the May feast days of Saints Isidore and Maria, Saint Madeline Sophie Barat, Saint Philip Neri, and Saint Joan of Arc. Even if the celebration has passed, these worksheets can be used all month long! 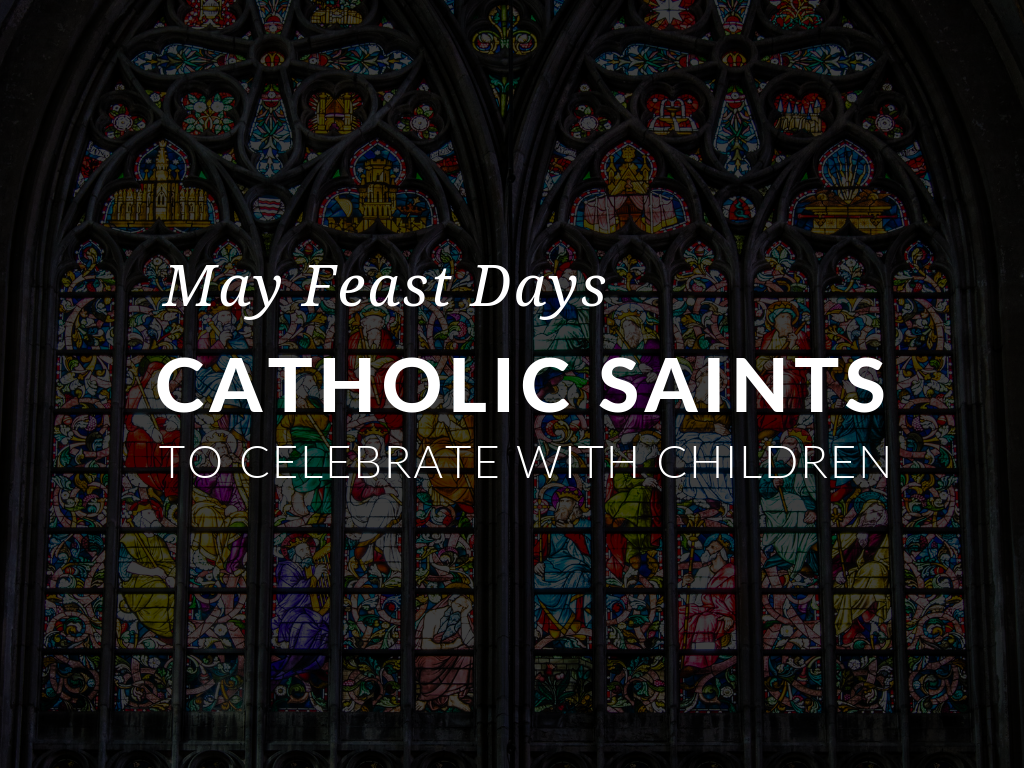 Isidore was born in Spain to very poor yet very pious Catholic parents. At a very young age, Isidore was taught to work very hard. He worked for a wealthy Farm owner all of this life.

He began each day by going to Mass and praying. After Mass he would spend his days planting and plowing in the fields. Those who worked with him were angry that he attended Mass in the morning because this caused him to be late to work. They complained to the landowner. The landowner decided to watch Isidore work to see if he was getting his work done. He saw Isidore plowing the field with angels helping him.

Isidore married Maria and they had a son. Their son died when he was very young. From that moment on they dedicated their lives to serving God and others. Even though they did not have much, they always shared with the poor. Isidore and Maria also give us the example of sharing all that we have with those who are in need.

Download a printable primary activity to celebrate the Feast Day of Saint Isidore and Saint Maria with children or students! 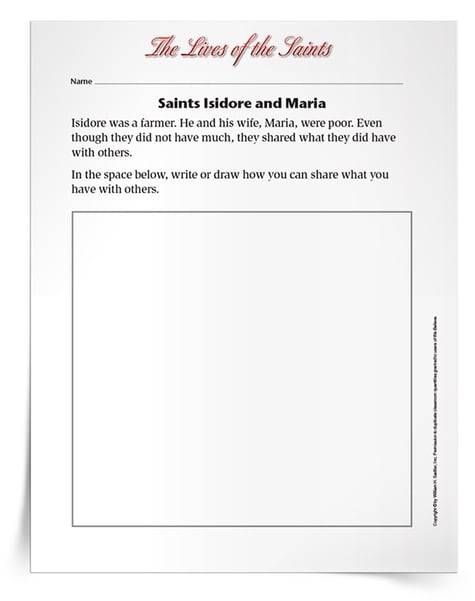 The Church celebrates the feast day of Saint Madeline Sophie Barat on May 25. The religious order, the Society of the Sacred Heart of Jesus, founded by Madeline Sophie Barat is still in existence today. This order still operates schools throughout the world for young women. These schools are known for providing an excellent education in a Christian environment.

Madeline Sophie Barat was born in France. She was the youngest of three children. Madeline Sophie was very enthusiastic about life and had common sense and good judgment. As a young child, she was devoted to her faith and prayer life. Her older brother, Louis, was a priest, and he was responsible for her education. Louis was very serious about his sister's education and made her learn Greek, Latin, physics, history, and mathematics. Even though there was little time in her life for play and friends, Madeline Sophie loved learning.

At the age of twenty-one, Madeline Sophie and three other young women started a religious order for women called the Society of the Sacred Heart of Jesus. Even though she was the youngest, Madeline Sophie became the superior, or leader, of this group and she remained so for sixty-three years.

Madeline Sophie Barat shared her love of God and love of education with others. By opening schools, she made it possible for other young women to get the high quality education that she received. We can follow her example by sharing our blessings with others. 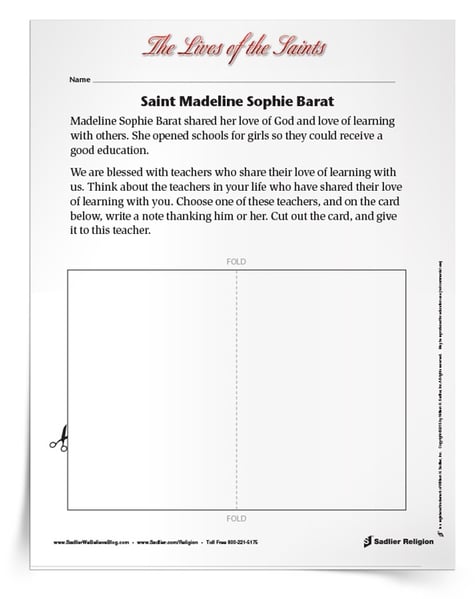 On May 26, the Church celebrates the feast day of Saint Philip Neri, who said, "Cheerfulness strengthens the heart and makes us persevere in a good life. Therefore the servant of God ought always be in good spirits." He was well liked because he was gentle, kind, and had a warm personality. He had a wonderful sense of humor and used this gift when helping others.

Philip was born in Florence, Italy. He had two sisters and a brother who died as a child. His parents were not wealthy. When he was eighteen years old, Philip's father sent him to live and work with an older cousin who was successful in business. While living with his cousin, Philip would often go pray in the mountains. It was then that he decided to dedicate his life to God.

He left his cousin and went to live in Rome, where he was a tutor for a friend's son. While there, he studied theology, philosophy, and wrote poetry.

Philip started visiting the poor and caring for the sick. He eventually became a priest. He began working with young people, finding them safe places to play. He was well liked because he was gentle, kind, and had a warm personality. He had a wonderful sense of humor and used this gift when helping others. His two favorite books were the Bible and a joke book.

Philip died after a long illness. The entire city of Rome was sad. Because of Philip, many people's faith was increased.

Download a primary activity in English or Spanish to celebrate the feast day of Saint Philip Neri.

On May 30, the Church celebrates the feast day of Saint Joan of Arc. Joan of Arc was faithful to God's will in her life. Although it seemed an impossible feat for a teenage girl to become a soldier, lead an army, and unite the country of France, Joan did just that because of her faith.

While Joan was growing up, there was a war going on between France and England. This war had lasted almost one hundred years. France was divided and had no king. Joan began hearing the voices of Saint Michael, Saint Catherine, and Saint Margaret. They told Joan that she was chosen by God to unite France and to help Charles be crowned king. Joan was very surprised because she knew nothing about politics or about the military. She wanted to serve God, but she did not know how to help her country. Finally, she realized that this was God's will and He would lead her.

At first she was laughed at, but soon Joan was leading the French army with a banner that said "Jesus and Mary." She began winning battles. Soon the English were gone from many towns in France. The French soldiers loved Joan. Eventually, she saw Charles crowned the king of France.

Joan of Arc was faithful to God's will in her life. Even when she was laughed at, she kept her focus on God and what he asked her to do. It seemed to be impossible for a teenage girl to become a soldier, lead an army, and unite the country of France, but Joan did just that because of her faith.

When things seem to be impossible in our lives, we can be like Joan and let our faith guide us.

Download a primary activity in English or Spanish to celebrate the feast day of Saint Joan of Arc. 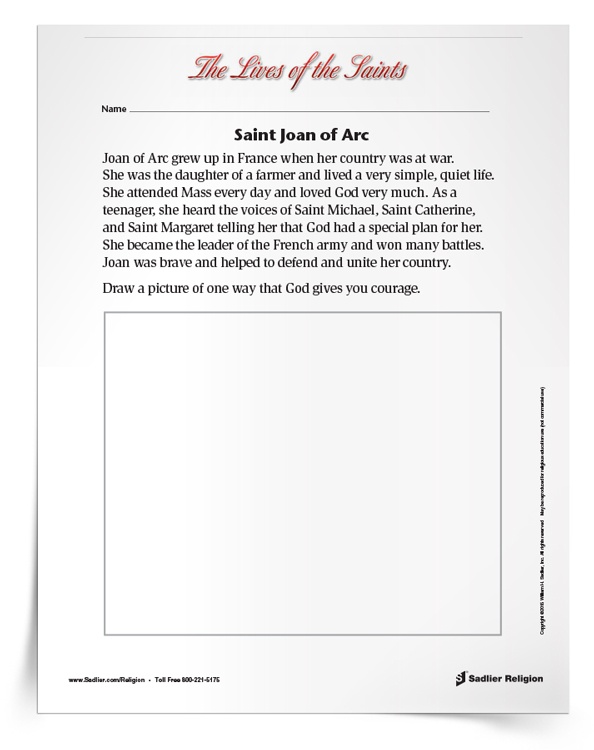