Catholic Saints for Kids to Learn About This Summer

During the season of Ordinary Time, we learn about the saints. Saints are followers of Jesus Christ who lived lives of holiness on earth and who now share in eternal life with God in Heaven. The lives of the saints teach us about true discipleship and are models of holiness for us all. The saints’ love and prayers for the Church are constant. Introducing Catholic Saints for kids is a great activity to encourage our students in their faith and help them continue learning throughout the summer. 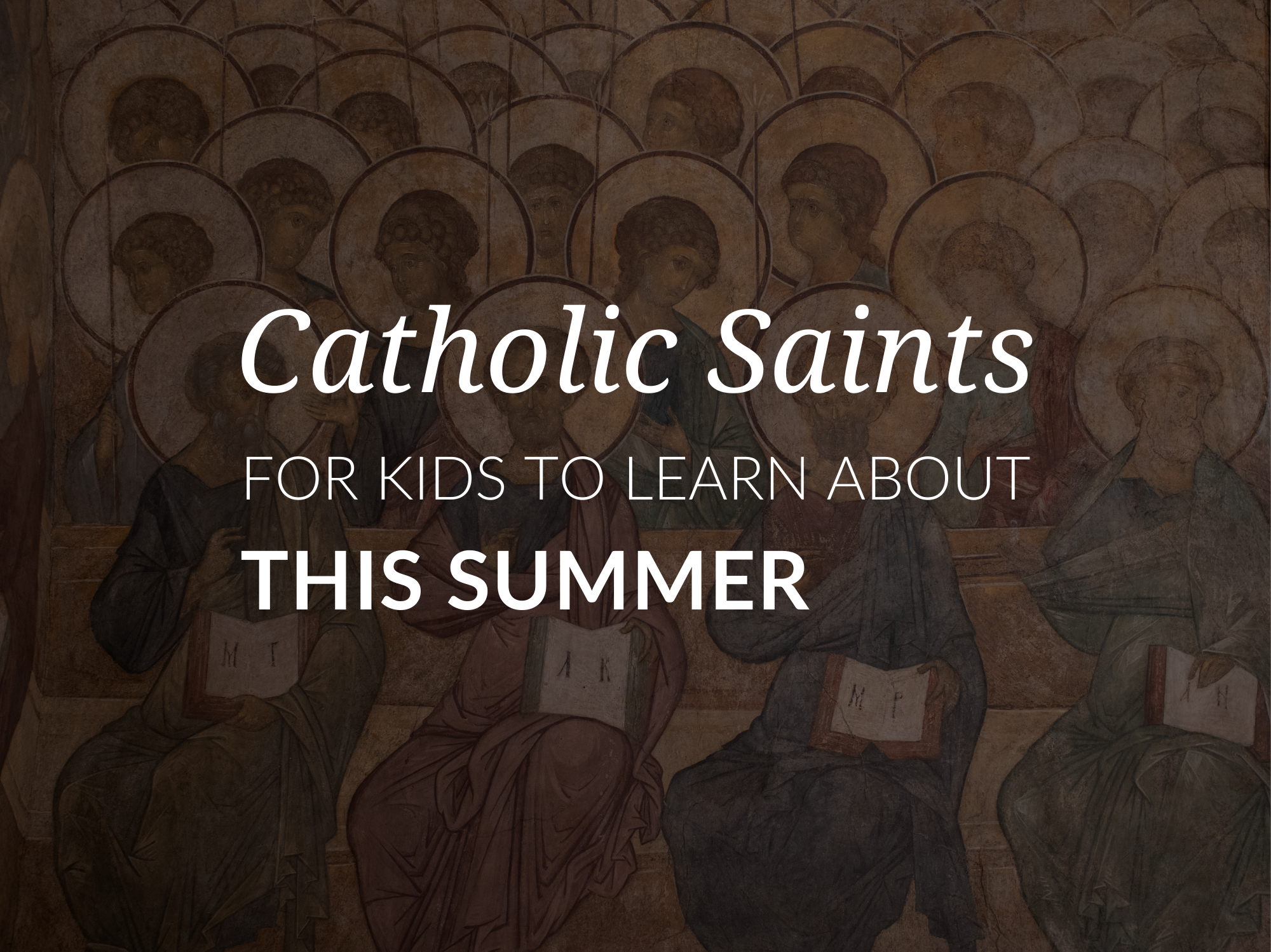 Catholic Saints for Kids to Study this Summer

This summer help students swap their action figures and TV superheroes with real-life heroes–the saints! Their lives of virtue, courage, faith, and adventure will inspire kids for a lifetime.

The summer months present a wonderful opportunity for children to learn about the saints. Encourage children in your family or parish to read and research about the saints this summer. Talk together about ways each saint maintained a connection with God through prayer and appreciation of God’s great gifts.

Introduce Catholic saints for kids with six real-life heroes and draw inspiration for activities and classroom discussions in this eBook. It features the stories of six saints whose feast days are celebrated during the summer months. Students will find short but interesting biographies about the six featured saints, and explore what the saints mean to us today. 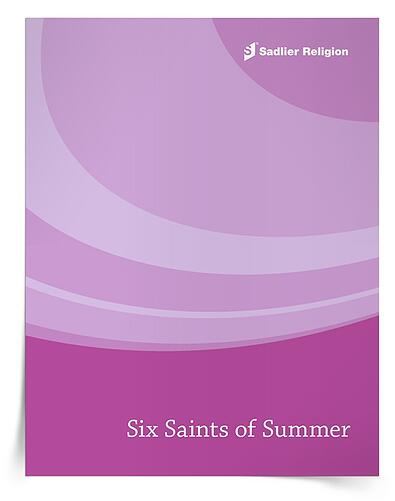 Thomas More served as Lord Chancellor and a close advisor to King Henry VIII of England. Despite the pope’s denial of the king’s application for permission to invalidate his marriage to Queen Katherine, Henry moved forward with his decision in England. When Thomas More refused his support and resigned from the government, he was accused of treason.

Saint Thomas More followed his conscience even though it meant that he had to give up a successful career and close friendships. He refused to submit to pressure from others to go against what he knew was right.

Download an intermediate activity to celebrate the Feast Day of Saint Thomas More with students on June 22nd. 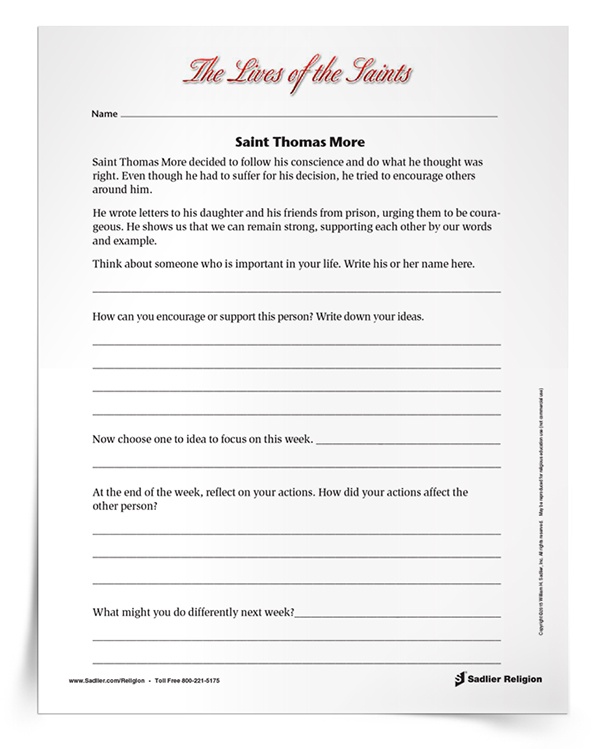 The Church celebrates the Feast Day of Saint Peter the Apostle on June 29th. Saint Peter’s given name was Simon at birth. He and his brother were fisherman from the village of Bethsaida in Galilee. One day as the brothers were mending their fishing nets, Jesus called out to them, "Come after me, and I will make you fishers of men" (Matthew 4:19). Both brothers left their nets to become disciples of Jesus.

Peter was present during the major events of Jesus’ ministry. After Jesus rose from the dead, Peter was one of the first to see him alive. Jesus gave him the name "Peter." The name means "rock." Jesus entrusted Peter with a very special task, appointing him the leader of the Church. Jesus said, "You are Peter, and upon this rock I will build my Church" (Matthew 16:18).

Download a printable primary activity that encourages students to honor the Feast Day of Saint Peter the Apostle with a poem. 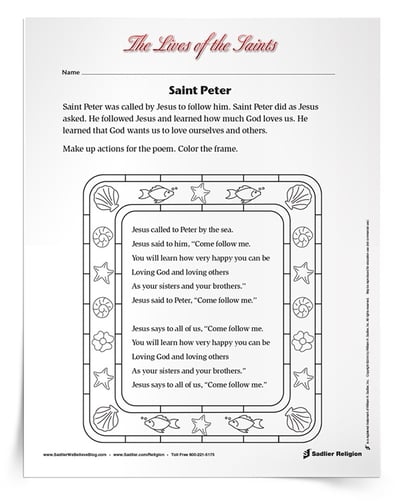 Another great Catholic Saint for kids to learn about is Saint Ignatius of Loyola. The Church celebrates his Feast Day on July 31. Sometimes referred to as a "soldier for Christ," Saint Ignatius Loyola worked to strengthen the Kingdom of God on earth by trying to be like Christ in everything he did. He and the order he started were able to accomplish great things by focusing on this simple goal.

While Ignatius was studying for the priesthood, his life of prayer and simplicity influenced several of his fellow students. Six of them decided to become priests as well. After they were ordained priests, they all made a special vow of obedience to the pope. This meant that they would carry out any work the pope asked them to do. They called themselves the Society of Jesus and received formal recognition as a religious order from Pope Paul III. The Society of Jesus soon came to be known as the Jesuits.

Ignatius was elected as the Jesuits' first general, or leader. He carried out this role until his death at the age of 65. He saw Jesuits start schools, lead retreats based on The Spiritual Exercises, and sail off to far away countries as missionaries. Today the Jesuits form the largest male religious order in the Catholic Church, and are present in almost every country in the world. Pope Francis is the first Jesuit to be elected pope. 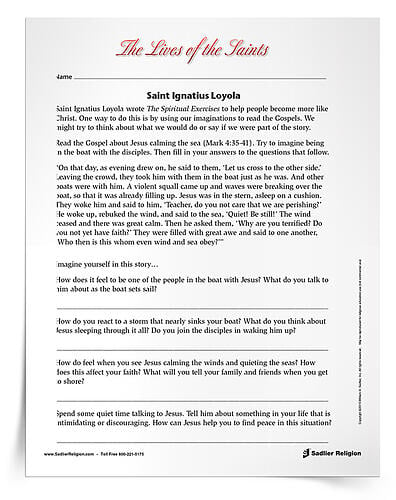