Share examples of holiness with Catholic kids and families with these stories of saints whose feast days are celebrated in the month of December. These inspiring saints are friends of God and our role models in faith. This post includes short biographies and companion activities that can be printed and shared with kids and families as they celebrate December feast days.

Studying the lives of the saints and holy people helps build family faith and inspires Catholic kids. Feast days are an opportunity to remember and be inspired by the lives of the saints, who are examples of holiness for us today. Children and families in your Catholic religious education program can use the short biographies and printable activities below to celebrate popular saint feast days in December! 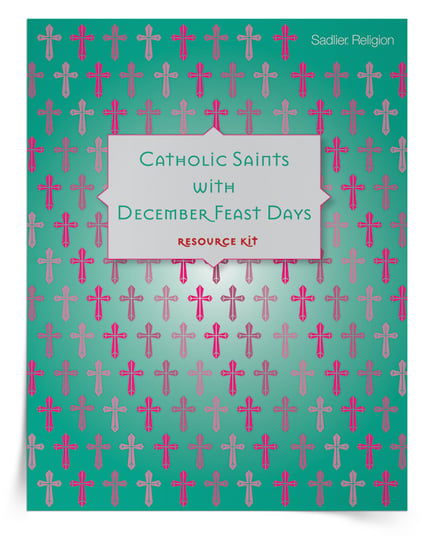 On December 6, the Church celebrates the feast day of Saint Nicholas of Myra.

Download an activity for the Feast of Saint Nicholas featuring the candy cane, a Christmas treat that is associated with this kindly, popular bishop. 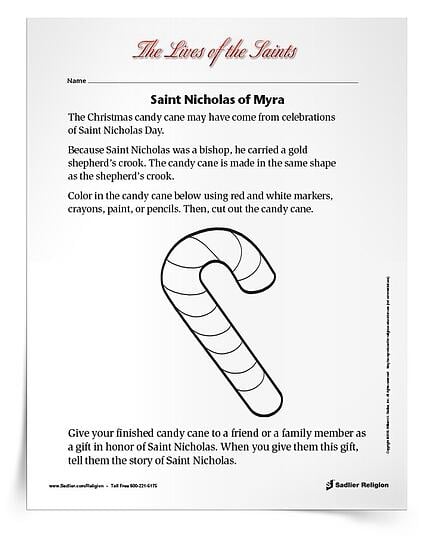 Saint Nicholas of Myra is one of the most recognized saints in the world. He is honored as the patron saint of Greece and Russia. It has been speculated that besides Mary, the Mother of God, Saint Nicholas’s image has been painted and drawn the most by Christian artists. Despite his popularity, we know almost nothing about Nicholas’s life.

We know Saint Nicholas was the Bishop of Myra, a city on the southern coast of modern-day Turkey. Traditional accounts say that Nicholas grew up as the only son of devoted Christian parents. His mother and father died when he was young, and Nicholas inherited a large fortune. He decided to use this money to help the many people he saw around him who were in need. He also decided to perform these acts of charity quietly, even secretly, and not to brag about them. According to early accounts, the Holy Spirit inspired the clergy and the people of Myra to appoint Nicholas as their bishop because of his goodness and acts of charity.

Legends of Saint Nicholas abound. One of the most famous involves the kindly saint leaving bags of gold on the doorstep of a poor family, thus providing the daughters with dowries so that they could marry. Some stories say that he dropped that bag of gold down the chimney so that it would land on the hearth below. This was more than a matchmaking venture, but rather one that spared the impoverished girls from being sold into slavery.

Today, Saint Nicholas is known as a gift-giver all around the world. But we no longer think of "Saint Nick" as a kindly bishop. Over the centuries and across the continents, we now know "Saint Nick" as "Santa Claus." Saint Nicholas is an example of kindness and generosity for us today. This year, as we prepare for Christmas, we should remember Nicholas's quiet acts of selfless charity as we give our Christmas gifts.

The candy cane is a Christmas treat associated with Saint Nicholas. The distinctive candy cane shape is attributed to a 17th century German choirmaster, who bent the candy into the form of a shepherd’s staff and gave it to children attending church services. The crook symbolizes the gentle image of Jesus, the Good Shepherd. As shepherd of his people, a bishop carries a hook-shaped staff called a crosier. Since Saint Nicholas was also a bishop, the candy cane serves as a perfect symbol for this patron and protector of children.

On December 9, the Church celebrates the Feast Day of Saint Juan Diego.

Download an activity about respect, a theme that runs through the life and story of Saint Juan Diego. Invite children and families to reflect on and share ways to respect God, ourselves, and others. 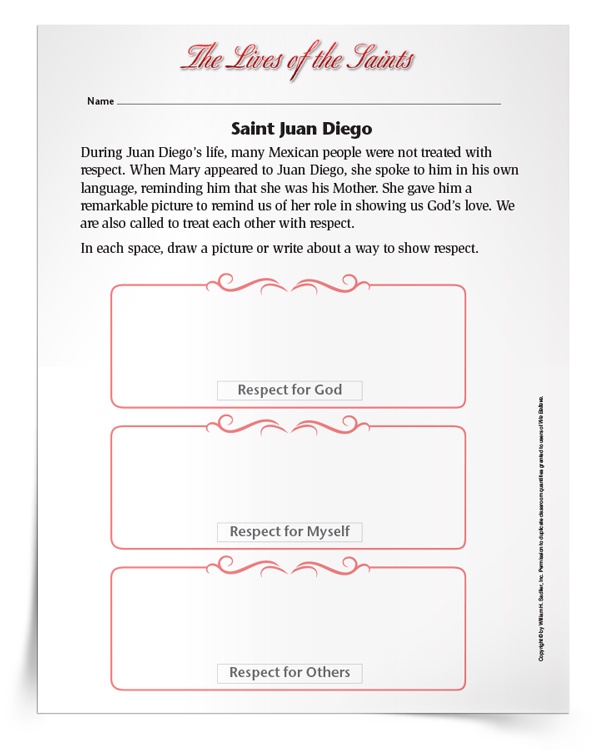 The Life of St Diego

Saint Juan Diego, born Cuauhtlatohauc ("the eagle who speaks"), was born in present-day Mexico near Mexico City during the Age of Exploration. Juan Diego was raised in the Aztec pagan religion. Although a poor Indian, he was able to provide for himself by working in the fields and weaving mats.

When the Spanish arrived in Mexico in 1519, so did missionaries wanting to spread the Good News of Jesus Christ to the native Mexicans. Juan Diego was from a region that had well-developed cultures, which were very different from those of European explorers. These differences often led to harsh treatment of the indigenous people. Many missionaries, however, wanted to only improve the conditions for the native people and teach them of Jesus Christ.

During his life, Juan Diego wanted to learn more about his faith. Twice a week, he and his wife, Maria Lucia, walked fourteen miles to Mass and religious instruction. When he traveled, Juan Diego often wore a tilma, a rough cloak made from cloth of woven cactus fibers. The cloak protected him against the cold evenings and early mornings.

On December 9, 1531, Juan Diego was on his way to church when he heard sweet music playing. He followed the heavenly music to the top of a hill where encountered a beautiful lady. She was dressed as an Aztec noblewoman. She called him by name and spoke in his own language. The woman told him she was Mary, Mother of Christ, and that she had a special task for him. He was to tell the bishop that she wanted a shrine to be built in that very spot. She wanted to show her “love, compassion, help, and protection” for all the people.

Juan Diego thought that the bishop would doubt such a request from a poor man like him, but he did as the Lady asked. The bishop did not believe Juan Diego at first. The bishop asked for a sign from the Lady that she was Mary, the Mother of God. In response to the bishop’s request, the Lady had Juan Diego fill his tilma with roses. Since it was December, it was amazing that these roses were blooming! So Juan Diego presented the roses to the bishop. There, imprinted on the tilma, was a picture of Mary as she had last appeared.

A small chapel was quickly built on the hill where Mary had appeared. The church was dedicated to Mary. Juan Diego lived in a small house nearby for the rest of his life. He cared for the church and those who visited it. He continued to share the story of Mary’s great sign of her love for the people of Mexico and all people.

St. Juan Diego was beatified on May 6, 1990 by Pope John Paul II and canonized on July 31, 2002. His feast day is celebrated on December 9 and he is the patron saint of Indigenous people.

The saints’ love and prayers for the Church are constant. Teaching children about saints provides inspiring examples of discipleship and models for living out their faith. Children in Catholic religious education programs can use the activities in this article at home or in the classroom to celebrate saint feast days in December!