On August 18, the Church celebrates the Feast Day of Saint Alberto Hurtado Cruchaga. Alberto was born in Viña del Mar, Chile on January 22, 1901. When Alberto was only four years old, his father died and his mother was forced to sell their farm. Because they were so poor, Alberto and his brother were sent to live with different relatives, often moving from one family to another. 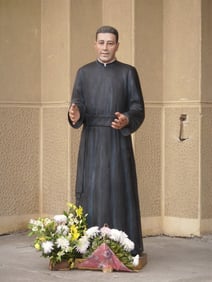 Alberto wanted to become a priest. But when he was awarded a scholarship to a Catholic college in Santiago, Chile’s capital city, he postponed his dream in order to support his mother and younger brother. He did this by working several jobs to provide for them, while simultaneously studying law and working to helping those who were poor. Eventually, he was able follow his dream of becoming a Jesuit priest.

After pursuing his studies in Italy, Spain, and Belgium, he was ordained. He returned to Chile where he taught religion, led retreats, and encouraged others in their works of charity. In 1944, while directing a retreat for women, he asked those in attendance to consider how to help the many poor and homeless people in the city. This was the start of a charity that would spread throughout South America. He named it Hogar de Cristo, which means “home of Christ.” Men, women, and children who had no homes were offered a welcoming place to live as well as assistance with other needs.

During his life, Alberto also authored books and began a magazine that explained the Church’s teachings and raised awareness about social justice issues. He died at the age of 51 on August 18th, 1952, after being diagnosed with pancreatic cancer. Pope Benedict XVI canonized him in 2005.

Alberto Hurtado Cruchaga centered his work in his love for Jesus Christ. He knew first-hand what it meant to be poor and he turned that knowledge into a ministry that served those who were without homes and resources. He worked tirelessly to remind people of their responsibility to help those who were in poor and in need. Today Hogar de Cristo is still serving the poor.

Download an intermediate activity to share with students as you celebrate the Feast Day of St Alberto Hurtado Cruchaga. This activity invites the students to be aware of and pray about issues they observe in their local communities. 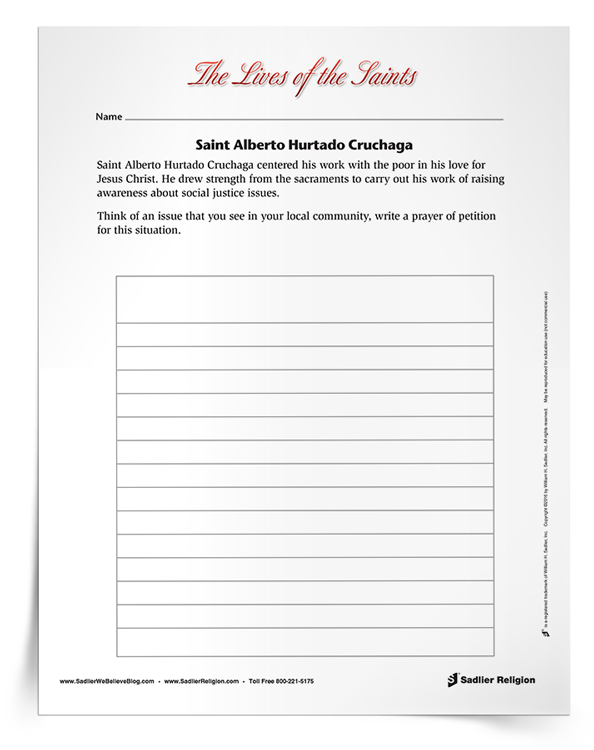 For older students, consider celebrating Saint Alberto Hurtado Cruchaga’s Feast Day with a special combination retreat and outreach event. The Helping the Homeless Event invites young people to plan and implement an outreach to a local homeless shelter or soup kitchen. In the process, they will come to better understand the causes of homelessness so that they can help to provide assistance to those who are homeless, as well as advocate on their behalf. The entire event requires two ninety-minute planning sessions, the activity itself, and a ninety-minute reflection session.