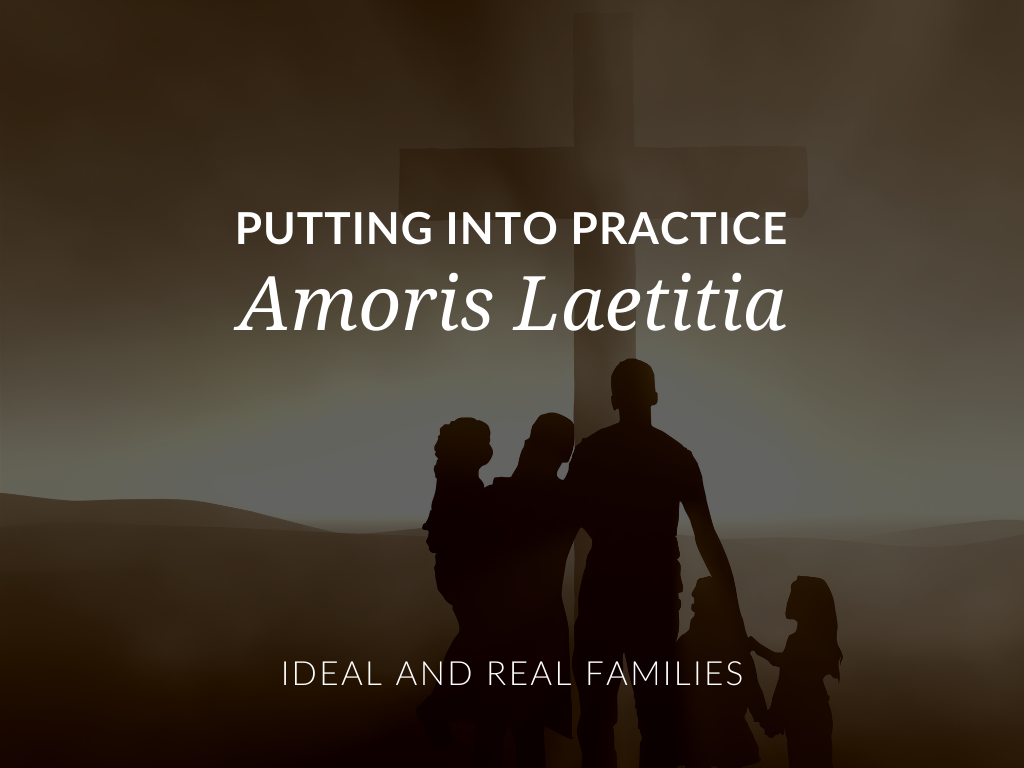 The papal document Amoris Laetitia, among other things, is a very honest survey of the varied and, sometimes, treacherous field of marriage and family life. Though honest in its appraisal, the document doesn’t fail to strike a tone of hope, highlighting the blessing that is inherent in each of these vocations. As a deacon and married man with six children, and co-coordinator of marriage preparation with my beautiful wife, Stacy, I know and live the blessing of marriage and family. But as a child of divorce and as man whose time and patience are limited, I also know the challenges.

I also know how important it is to have faith be a part of one’s marriage. It can really come in handy, and even save the day. Faith can also be a meaningful way you and your spouse (and your family) celebrate the goodness and gift that is life. Faith is, after all, not only a set of beliefs. It is a language. The more faith is spoken within marriages and families, the more meaningful that language becomes, and the more practical faith becomes.

Marriage is, indeed, an icon of Christ’s love for his church (Ephesians, 5:32). Marriage, from the perspective of faith, is rooted in God’s gift of man and woman as complements to each other. Children, too, are viewed as blessings from God. There is little doubt that where there is life, togetherness, and unity, there is a little slice of heaven. The Catholic Church views the sacredness of marriage with such great appreciation, it celebrates matrimony as one of the seven sacraments. But with so much theology and sanctity surrounding marriage, why do some marriages “fail”? Why is the divorce rate so high? Are people just not “trying hard enough”?

Marriage, from the perspective of faith, is rooted in God’s gift of man and woman as complements to each other.

The truth is, the Bible is filled with examples of marriages that have gone awry, beginning with the first couple, Adam and Eve. Through poetic verse, the author of the Book of Genesis shows God bringing the two together:

So, the LORD God caused the man to fall into a deep sleep, and while he slept, He took one of the man’s ribs and closed up the area with flesh. And from the rib that the LORD God had taken from the man, He made a woman and brought her to him. And the man said:

“This is now bone of my bones

and flesh of my flesh;

she shall be called ‘woman,’

for out of man she was taken.”

For this reason a man will leave his father and mother and be united to his wife, and they will become one flesh. And the man and his wife were both naked, and they were not ashamed. (Gen 2:21–25)

This is a blessed reality to which Jesus himself refers when he is asked about the Law of Moses allowing for divorce (Mk 10:1-12).

Yet, one chapter later, we find the “serpent” (Satan) seducing the couple into disobeying the single command God had given them: not to eat of the fruit of the Tree of the Knowledge of Good and Evil. (Gen 2:16) Upon doing so, Adam and Eve are filled with fear of God and shame for what they did. They notice their nakedness for the first time as well as the absence of the of the partnership they once enjoyed. On this score, the Catechism of the Catholic Church notes that because of their sin, “the union of man and woman becomes subject to tensions, their relations henceforth marked by lust and domination” (CCC, 400).

So, in effect, the answer to the earlier question, “Why do so many marriages “fail”? is simply that we have inherited a fallen condition from our first parents, Adam and Eve. Yet, the story of Adam and Eve doesn’t end with disobedience, shame, and dissonance. God promises to rectify the situation by proclaiming that there will be one (a woman) born of Adam and Eve’s line that will oppose the “serpent” (Satan) who seduced them. And that through her, Satan will be defeated (Gen 3:15). We know, now, that the “woman” is Mary. And the offspring that will defeat Satan is her son, Jesus.

While the story of salvation is true, Jesus is victorious over sin and death, how might this truth factor into marriage and family life? How does knowing that “Jesus has got this” help us?

First off, knowing that Jesus is Lord does not: pay the bills, fix the leaky sink, land that dream job, solve all arguments and disagreements (it can even start some), or keep us from unfortunate situations. After a statement like this, you might be wondering just what good is faith, then?

Faith reminds us that there is what we see and what we do not see. While we might be in a moment or period where marriage or family life does not feel blessed, that does not mean it isn’t.

Even in the most unfortunate case of divorce, God can draw straight with crooked lines. I have seen many couples who, for their respective reasons, threw in the towel and chose to divorce. I don’t judge them, and I don’t blame them. Divorce, itself, is never a remedy.

While, from a faith perspective, the Church doesn’t recognize divorce, it does believe in the practice of annulment. Annulment means that there is enough evidence to suggest that the couple was not able to contract a marriage validly; that is, according to the demands of the Sacrament of Matrimony. This could mean that one or both parties didn’t understand their commitment or were not capable of marriage due to some pre-existing “impediment” (e.g., coercion, mental instability, ignorance, and deceit/fraud to name a few).

But back to divorce: Outside of a few extreme cases involving abuse, negligence, mental instability, criminal behavior (or a combination thereof) no one’s family is made better by divorcing. I have seen divorce function as a kind of pressure release valve by providing needed distance to couples who just can’t seem to get along. After experiencing this distance and adjusting to it, having less frequent contact, some divorced couples can support each other and the kids in healthier, positive ways. Of course, this is not always the case. Some divorces can really traumatize a family. But even for those who manage to “make divorce work,” divorce is not a remedy. It cannot make up for the touch and togetherness that every parent and child crave. The scenario of moms and dads parenting a family together cannot be diminished. And the fact that divorce exists should not keep you from considering marriage as a real possibility for lifelong companionship.

A Focus on Blessings

One of the best things couples and families can do is spend time reflecting on the blessings they enjoy. At times, these blessings are difficult to see. However, when we invite God into our reflection, our reasons for gratitude become clearer. Cultivating an attitude of gratitude in the home can be a healing salve for the many ‘bumps” along the road of life.

Help keep gratitude at the center of family life with the Keeping Gratitude at the Center of Our Family Activity. This activity for families is related to the first three chapters of the nine-chapter papal document Amoris Laetitia.