Feast Days provide catechists and parents with a wonderful opportunity to introduce children to Catholic saints. In this article, you’ll discover a short biography and free printable activity that can be used to learn more about a popular saint for kids, Saint Gianna Beretta Molla. Whether at home or in the classroom, these resources will help children celebrate the life and feast day of St Gianna Beretta Molla. 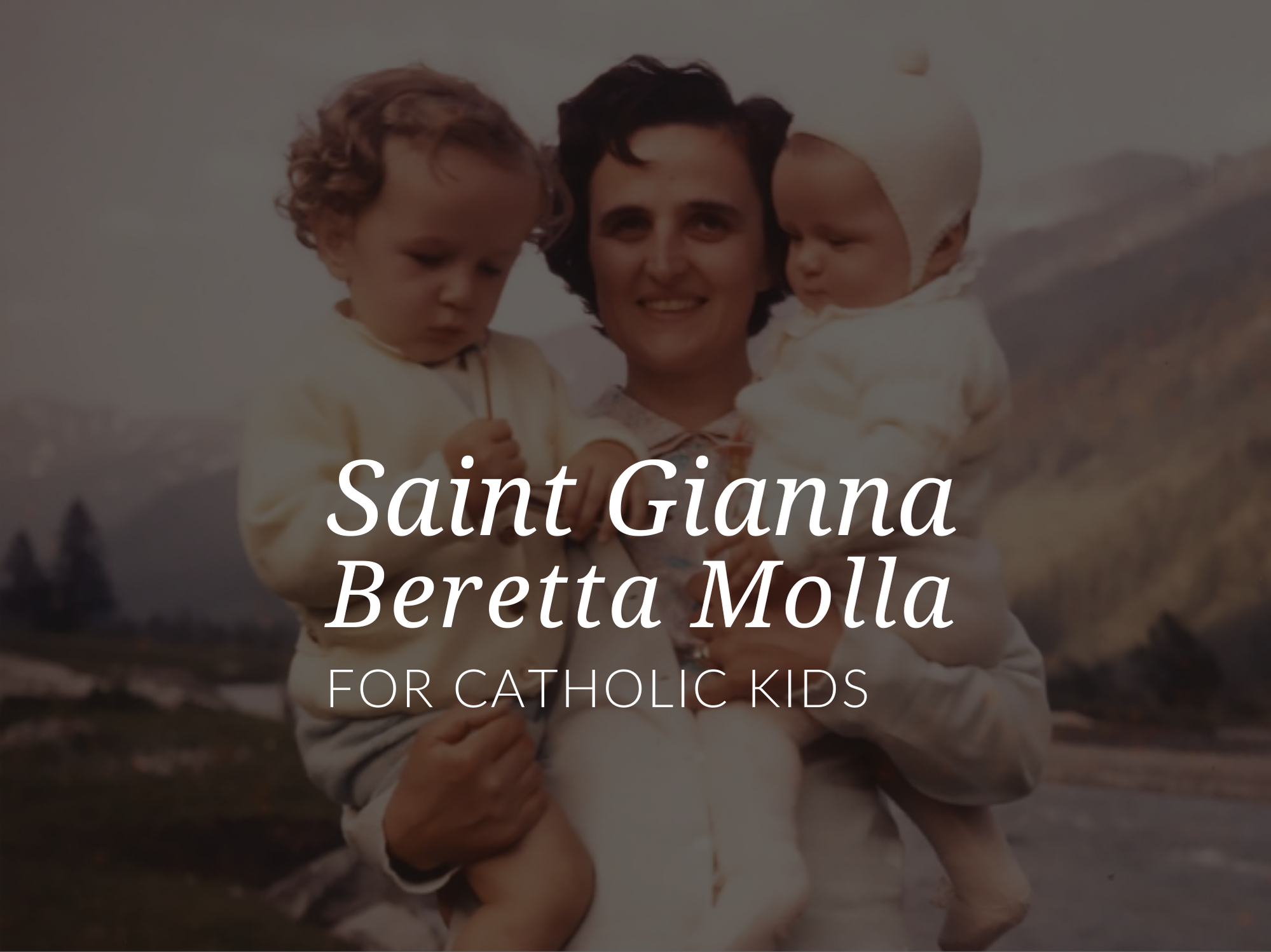 The Church celebrates the feast day of Saint Gianna Beretta Molla on April 28. Saint Gianna followed Christ as a doctor, a mother, and a wife. She was a cheerful and energetic person who loved life and was involved in many activities. 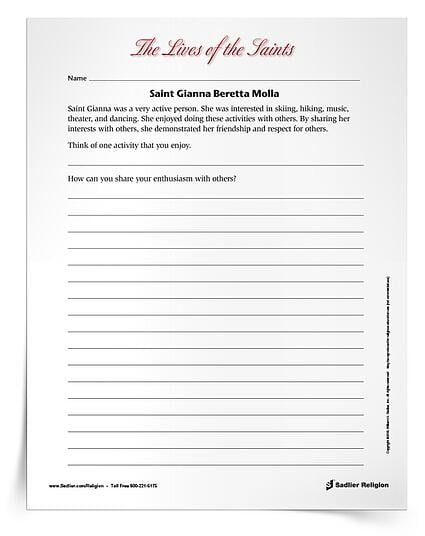 Gianna was born on October 4, 1922. She lived during a time of great changes for both for her native country of Italy and the world. Benito Mussolini had just become leader of Italy the year before Gianna was born. He expanded his powers until he became dictator of Italy. During World War II, Mussolini made an alliance with Nazi Germany and Japan. Gianna and her husband both opposed Mussolini's government, as did many Italians. Mussolini was deposed at the end of the war, and the United Nations was formed in 1945 to promote peace throughout the world.

During Gianna’s lifetime, in the medical field doctors were developing new ways to fight disease and infection. Penicillin was discovered in 1928 by the Scottish scientist Alexander Fleming. It began to be used for treatment of infections during the 1940s. In 1952, Jonas Salk, an American scientist, discovered the first vaccine for polio, a dangerous disease that affected many children.

Gianna was born in Milan, Italy. She grew up surrounded by a close-knit and loving family. Her father worked in a cotton mill to provide for his wife and eight children. Gianna's family was very religious, and Gianna would accompany her mother to daily Mass. Gianna was a happy child, although she struggled with her school work and battled poor health.

When Gianna was a teenager, her oldest sister died at the age of 26. From this point on, Gianna began to take her faith more seriously. She realized that her faith could not just be a habit, but that she had to live her faith with joy. She began to make more time for personal prayer and meditation every day. Gianna took on a leadership role in the Catholic women's group she belonged to. She encouraged the other women to pray and find opportunities to help others. She said, “The secret of happiness is to live moment by moment and to thank God for all that He, in His goodness, sends to us day after day.”

“The secret of happiness is to live moment by moment and to thank God for all that He, in His goodness, sends to us day after day.”

Gianna also became more diligent about her school work. She thought about becoming a missionary to Brazil, but eventually decided that the best way to fulfill her desire to serve others was by becoming a doctor. She was drawn to care for mothers, children, and senior citizens in particular, and she eventually specialized as a pediatrician. Many of her patients felt that she was not only their doctor, but also their friend and confidante.

Gianna married Pietro Molla when she was 32 years old. Both of them were passionate about their jobs, but Gianna insisted that they also make time for other pursuits. They enjoyed entertaining guests, attending plays and concerts, and skiing and hiking. Most of all, they loved their children. Gianna considered her children her “treasures.” Although it was unusual at this time, Gianna continued to practice medicine after she had children. She loved her children so much that this love overflowed into her work as a doctor.

When Gianna was pregnant with her fourth child, doctors found she had a tumor that threatened her life and the life of her baby. As a doctor, Gianna was aware of the risks involved in her treatment options. She decided to have a surgery that carried a higher risk for herself, but was safer for her baby. The surgery was successful in removing the tumor, and a few months later Gianna gave birth to a healthy daughter, Gianna Emanuela. However, Gianna herself contracted an infection. While modern antibiotics could have saved her, doctors at that time were unable to defeat the infection. Gianna died at the age of 39, one week after the birth of her daughter.

Saint Gianna reminds us that we are called to follow Christ through prayerful service in every situation in life. She recognized that life is a gift from God and she wanted to share it with others.

Gianna was beatified by Pope John Paul II on April 24, 1994, during the international Year of the Family. Gianna Beretta Molla's husband and daughter were present at her canonization. Gianna Emanuela followed in her mother's footsteps by becoming a doctor.

Saint Gianna reminds us that we are called to follow Christ through prayerful service in every situation in life. She recognized that life is a gift from God and she wanted to share it with others. We should pray to her for help in finding ways to offer our own talents and gifts in the service of others.