Feast Days provide catechists and parents with a wonderful opportunity to introduce children to Catholic saints. In this article, you’ll discover a short biographies and free printable activities that can be used to learn more about popular saints for kids, Saint John XXIII and Saint John Paul II. Whether at home or in the classroom, these resources will help children celebrate the life and feast days of these two great saints and learn about the steps of canonization.

At the end of April 2014, a single ceremony took place in Saint Peter’s Square to declare Pope John XXIII and Pope John Paul II saints. The Vatican live streamed this historic event. Learn more about the process of canonization and these two saints and share inspiring and informative activities with Catholic kids and families.

The Church celebrates the feast day of Saint John XXIII on October 11. Saint John XXIII was open-hearted, loving, generous, funny, caring, yet also seriously concerned about the future of the Church.

Download a printable activity in which children are asked to broadcast a message of peace, just like Saint John XXIII.

The Life of St John XXIII

The world during the lifetime of Pope John XXIII was full of change and war. He lived during World War I and World War II. After World War II, the nations of the world, led by the United States and the Soviet Union, began an "arms race," stockpiling nuclear weapons. The struggle became known as the "Cold War." During this time, Pope John XXIII was elected and continually called for peace. When Soviet missiles were found in Cuba, a country very near to the United States, he broadcast a message on Vatican Radio to the rulers of the world. He said, "We beg all rulers not to be deaf to the cry of humanity." This message encouraged Nikita Krushchev, the leader of the Soviet Union, to back down. Pope John's last encyclical, Pacem in Terris (Peace on Earth), is considered his "last will and testament" to the world.

Angelo Guiseppe Roncalli was born on November 25, 1881, in a small farming community in northern Italy. He was the fourth of fourteen children. The family farmed as sharecroppers. Angelo helped his brothers to work in the fields until he entered the seminary in 1892. He began to write spiritual notes at that time that were later collected into a book called Journal of a Soul.

Angelo was ordained a priest in Rome in 1904. In 1905 he was appointed secretary to Bishop Tedeschi of Bergamo. Bishop Tedeschi was very involved in the lives of the people. He supported programs that gave dignity and worth to the lives of workers and the poor. Father Roncalli helped him as much as he could. When the bishop died in 1914, Father Roncalli continued to minister in various ways and also taught in the local seminary.

Saint John XXIII teaches us that we are never too old for right action, and that it is never too late for peace.

During World War I Father Roncalli served as a sergeant in the medical corps and as a chaplain to wounded soldiers. After the war, he was concerned about the spiritual needs of young people and opened a "Student House" where they could gather for meetings and discussions.

In 1925 he was named a bishop, and chose as his motto Oboedientia et Pax (Obedience and Peace). As bishop, he served in the Middle East, in Bulgaria, Turkey, and Greece.

The Middle East was the crossroads of the world. There Bishop Roncalli met people of many faiths and cultures. Unity among people of different religions and within Christianity itself later became one of his goals as pope.

When World War II began, Bishop Roncalli helped Jewish people escape from the Nazis in Germany to other countries under the protection of "transit visas" from his office. In 1953, he was made Cardinal and Patriarch of Venice.

Cardinal Roncalli was elected Pope on October 28, 1958. His pontificate lasted less than five years, but in that time "Good Pope John" presented to the world "an authentic image of the Good Shepherd." He was the first Pope to leave the Vatican since 1870. He visited prisoners in Rome's city jail. He also visited orphanages, schools, and churches. He was open to all people. He once said, "It often happens that I wake up at night and begin to think about a serious problem and decide I must tell the Pope about it. Then I wake up completely and remember that I am the Pope."

His most memorable act was calling of the Second Vatican Council, with the goal of renewing the Church. Pope John XXIII opened the Council on October 11, 1962. He had already been diagnosed with stomach cancer and said to a friend: "At least I have launched this big ship -- others will have to bring it into port."

Because Saint John XXIII was concerned for the future of the Church, he was empowered to act in the present -- no matter what people thought. Saint John XXIII teaches us that we are never too old for right action, and that it is never too late for peace.

The Church celebrates the feast day of Saint John Paul II on October 22.

John Paul II was born just after the end of World War I. Even though peace treaties were signed, the suffering caused by this war continued in countries around the world. During his youth, World War II began and Germany's Nazi army invaded Poland.

Karol Wojtyla was born in Wadowice, Poland on May 18, 1920. He was a good student and athlete and developed his talent as an actor. His mother died when he was nine, and his only brother died four years later. These sorrows brought him even closer to his father, whose deep faith inspired him. When Karol decided to become a priest, he had to study in secret because his country was under the rule of Germany’s Nazi government. At the age of 38, he was the youngest man to be appointed bishop in Poland's history.

In 1978, he was elected pope and took the name of John Paul II. His early experiences in Poland during wartime made him a strong supporter of human rights and social justice. He played an important role in helping to end the long rule of Soviet communism in Russia and in Eastern Europe, including his native country of Poland. Pope John Paul II called for solidarity among all people of the world. He traveled more than any pope in history and visited 129 countries. In addition to his native Polish, he was fluent in many languages: Italian, French, German, English, Spanish, Portuguese, Ancient Greek, and Latin. Everywhere he went, he preached the mission of peace and reconciliation, and the importance of spreading the Good News of Jesus Christ throughout the world.

Saint John Paul II inspired people throughout the world with his deep faith, and his passion for social justice. He reminds us of what it means to love Christ through a deep commitment to our faith and to taking care of those who are poor or oppressed.

As pope, he established World Youth Day as a way to strengthen the faith of young people. He traveled to cities hosting these celebrations and spoke to young people about the love and joy of following Jesus.

In 1981, John Paul II was shot by a Turkish gunman while greeting pilgrims in St. Peter's Square at the Vatican. He recovered and later visited the shooter in prison, forgiving him for the act of violence that nearly took his life. John Paul II died in 2005 after serving as pope for 26 years, one of the longest reigns in history. On April 27, 2014 Pope Francis canonized Pope John Paul II as a saint of the Church.

Saint John Paul II inspired people throughout the world with his deep faith, and his passion for social justice. He helped to bring the Church into the modern world. He reached out to those in deepest need. He reminds us of what it means to love Christ through a deep commitment to our faith and to taking care of those who are poor or oppressed.

Steps to Becoming A Saint

What does it take for someone to be named a saint? There are four major steps to canonization. Download a free handout to teach your students about the steps to sainthood— a perfect resource to accompany learning about these saints and others! 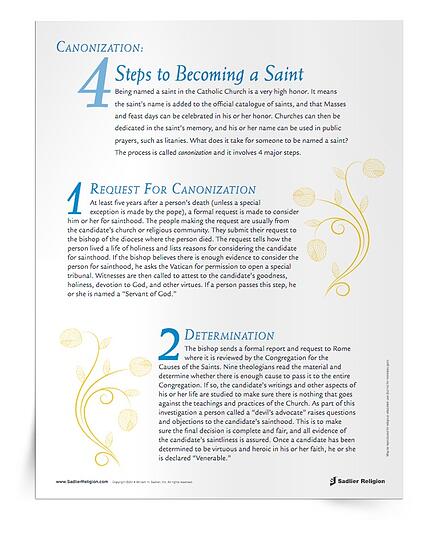