Feast Days provide catechists and parents with a wonderful opportunity to introduce children to Catholic saints. In this article, you’ll discover a short biography and free printable intermediate activity that can be used to learn more about a popular saint for kids, Saint Catherine of Siena. Whether at home or in the classroom, these resources will help children celebrate the life and feast day of Saint Catherine of Siena. 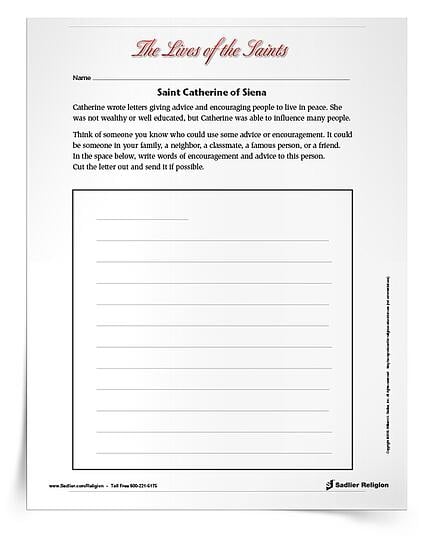 Catherine was born on March 25, 1347. The late middle ages was a time of great change in the world and for the Church. The bubonic plague, a deadly and contagious disease often called The Black Death, spread across Europe and killed one third of the population. The Hundred Years War between France and England began. The 14th century was also a troubled period in the life of the Church. During Catherine's lifetime, the pope, who had always lived in Rome, was living in France, which caused problems. This era was also the beginning of the Renaissance, a revival of classical art, architecture, literature, and learning that began in Italy

Pope Benedict XVI said of Saint Catherine of Siena, “Even in the most difficult times, the Lord does not cease to bless his People, bringing forth Saints who give a jolt to minds and hearts, provoking conversion and renewal. Catherine is one of these and still today speaks to us and impels us to walk courageously toward holiness to be ever more fully disciples of the Lord.” (Benedict XVI, General Audience, November 24, 2010)

Catherine was from a very large family. She had twenty-five brothers and sisters. Her family lived in Northern Italy. Her father was a wool dyer and her mother ran the household and took care of all the children. Catherine did not go to school and did not have a formal education.

Catherine wrote that no matter where people lived or who they were, they should realize that all their talents and everything they have is from God.

When she was very young, Catherine began to find quiet places where she could pray and talk to God. At the age of sixteen, prompted by a vision of Saint Dominic, Catherine joined the Third Order of Dominican nuns. She wore their habit and lived in a small room in her parents' home. Catherine spent three years in this room, praying. After this time, she began to serve those who were sick and poor. People began to visit Catherine because they wanted to follow her example of living in God's love.

There were many disagreements in the Church during Catherine's life. The pope, Pope Gregory XI, was living in France instead of Rome. Catherine believed that God wanted the disagreements to end so she began to write to the pope. She successfully convinced the Pope to move back to Rome.

Catherine continued to write letters to all kinds of people, from the poorest in the land to the richest and most famous. It was considered a miracle that Catherine was able to write well because she never attended school. In her letters, Catherine encouraged people to live in peace.

Catherine's writings are among the classics of Italian literature. The advice and wisdom contained in her writings can still be applied to our lives today. Catherine wrote that no matter where people lived or who they were, they should realize that all their talents and everything they have is from God. Catherine used her talents to have a positive effect on the world.

Saint Catherine of Siena was canonized in 1461. Pope Paul VI declared her a Doctor of the Church in 1970. She also holds the titles of Co-Patroness of the City of Rome and of Patroness of Italy.

"Eternal God, You are a fire that takes away the coldness, illuminates the mind with its light, and causes me to know Your truth." - Catherine of Siena