Feast Days provide catechists and parents with a wonderful opportunity to introduce children to Catholic saints. In this article, you’ll discover a short biography and a free printable activity that can be used to learn more about a popular saint for kids, Thomas More! Whether at home or in the classroom, these resources will help children celebrate the feast day of Saint Thomas More. 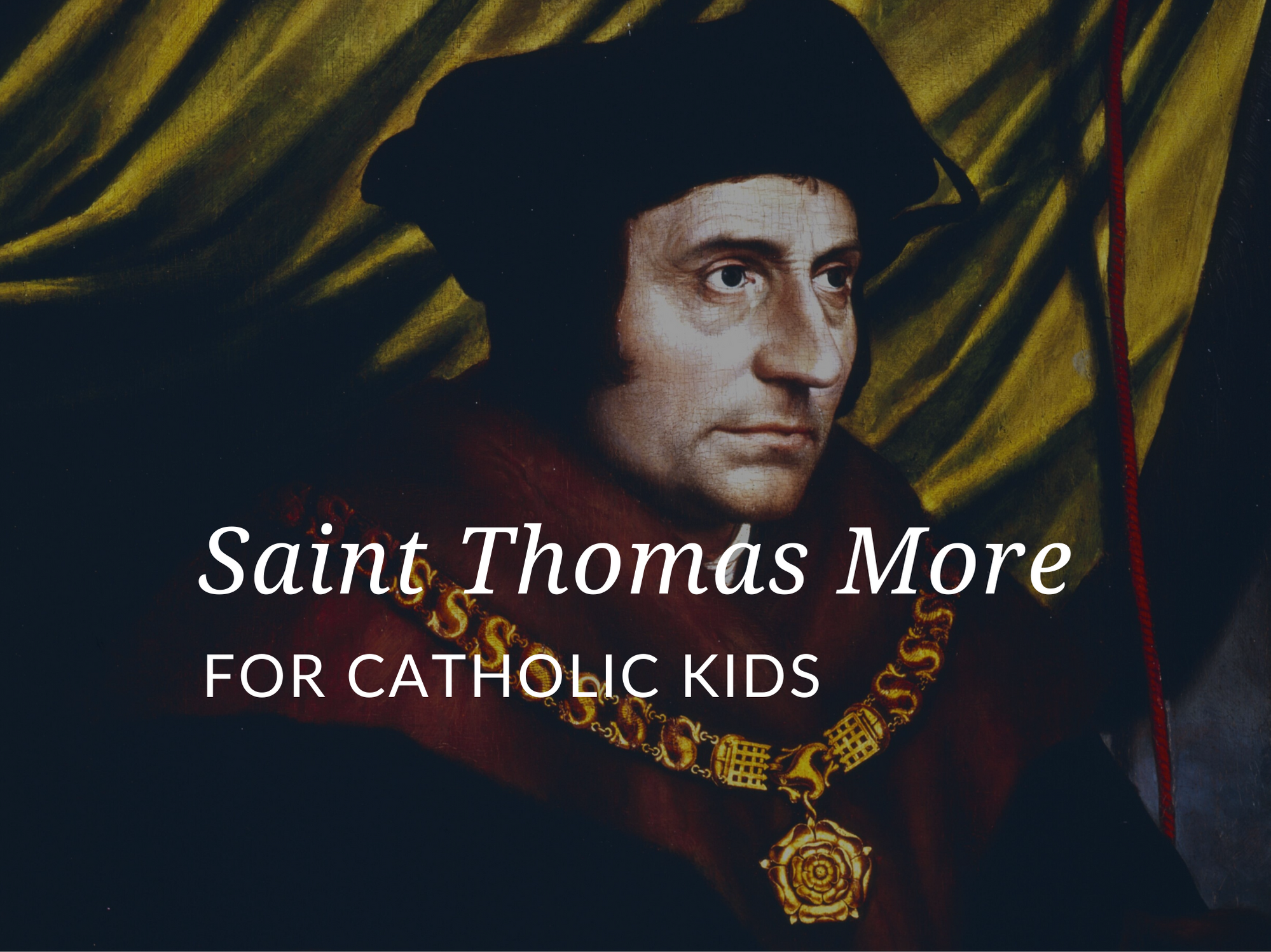 June 22 is the feast day of Saint Thomas More.

Download a printable activity for Catholic kids to mark St Thomas More feast day and reflect on how we can remain strong, supporting each other by our words and deeds, like this great saint. 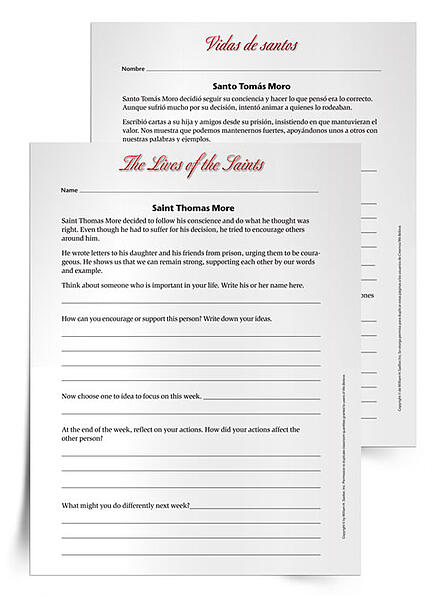 Saint Thomas More who was born February 7, 1478, in the country of England.

Thomas’ father was a lawyer, and he hoped that his son would follow him in this profession. From a young age, Thomas was known for his intelligence and wit. But Thomas was interested in and excelled at many things in addition to law, including literature, philosophy, music, and languages. His father worried that Thomas might not become a lawyer since he had so many different paths open to him.

For a long time, Thomas himself considered another profession: the priesthood. He felt drawn in particular to the peace and solitude of the monastery. As much as he admired this way of life, he realized it was not what God was calling him to do. He began to practice law. He got married and had a large family.

Thomas had a gift for friendship. His respect and good opinion were valued by many of the most brilliant and most powerful men in England. Thomas was asked to serve in the government and, as Lord Chancellor, became a close advisor to King Henry VIII. In his own words, Thomas considered himself, “the King’s good servant, but God’s first.”

King Henry admired Thomas and respected his judgment, but Henry was a notoriously strong-willed and stubborn monarch. King Henry’s wife, Queen Katherine, had never given birth to a son, so Henry decided his marriage should be invalid and he should be free to remarry. He applied for permission to the pope in Rome, but his request was denied.

Saint Thomas More followed his conscience even though it meant that he had to give up a successful career and close friendships. He refused to submit to pressure from others to go against what he knew was right.

Because Thomas could not support the king’s decision, he resigned from government. This decision ended both his career and his friendship with the king. Without his salary, Thomas’s family was reduced to poverty. However, Thomas was confident that he had followed his conscience, and was even able to joke that he was happy to have more time to read his beloved books!

King Henry VIII went further and declared himself head of the Church in England. He commanded that all of his subjects publicly swear to follow his authority instead of the pope. Although Thomas had never openly opposed the king and no longer served in the government, he was called in to take the oath. When he refused, he was arrested and charged with treason.

Throughout his imprisonment, Thomas never spoke harshly of the king, nor did he complain about the suffering he endured in prison. His cell was damp and cold. He did not have enough to eat. He was forbidden to keep any books or writing materials. He drew strength from prayer and contemplation. Many of his friends and family members urged him to take the oath to end his suffering, but he refused. Thomas was in prison for 15 months, and at his trial, it was clear that those months had weakened his body but not his spirit. Thomas still refused to go against his conscience and take the oath. He was convicted of treason on the false testimony of a former friend.

Thomas was killed on July 6, 1535. On the day he was executed, Thomas comforted one of his friends by promising his prayers and a joyful reunion in heaven.Saint Thomas More followed his conscience even though it meant that he had to give up a successful career and close friendships. He refused to submit to pressure from others to go against what he knew was right.