Celebrating the Feast Day of Saint Francis of Assisi 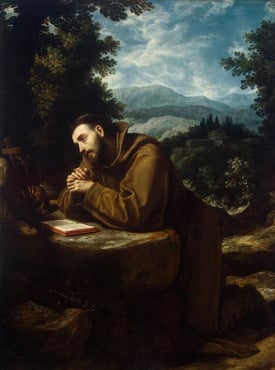 Saint Francis grew up the son of a wealthy cloth merchant and his wife in the town of Assisi in the Italian hills. Francis loved life and had lots of friends. His father and mother were proud to have a son who was liked by everyone. They made sure that he had everything he wanted.

Yet for Francis, this was not enough. He wanted to give his life to a noble cause. When he was twenty years old, he decided to join the army. That did not satisfy him either, so he turned in a very different direction. He started to get involved in works of charity. He visited hospitals, took care of those who had no one to care for them, and gave money and clothing to beggars.

One day he was praying in the rundown church of San Damiano when he heard a voice challenging him to rebuild the Church. At first, Francis thought the voice was referring to the actual building of San Damiano, which badly needed repairs. He took cloth from his father's storehouse and sold it to buy building materials. His father was embarrassed by the dramatic change in Francis and demanded that he give the money back, even appealing to the bishop to talk sense into his son. The bishop kindly explained to Francis that he could not serve God by taking what did not belong to him. Francis realized that the best gift he could give to God was not any possession, but the gift of his life.

Francis dressed in old clothes and traveled through the countryside doing manual labor and helping the poor. He refused to own anything so that he would be reminded of God's love and care for everything he has created. Francis had a deep respect for nature and animals. He composed a hymn in praise of creation. Many of the friends who had shared his previous extravagant lifestyle were now attracted to Francis' enthusiasm for a simple way of life. Some of them sold all of their belongings and came to live with Francis. A young woman named Clare asked Francis to help her start a community of women who wanted to live the dramatic poverty of Francis and his brothers.

Near the end of his life, Francis became very ill and suffered greatly. However, he did not complain, nor did he want the brothers to treat him differently because he was sick. He welcomed suffering as a way to draw close to Christ. He died surrounded by his brothers, who sang the famous canticle that he had written in praise of all creation.

Pope Francis’ encyclical letter Laudato Si’: On Care for our Common Home, is named from that same canticle in praise of creation composed by Saint Francis. As we as Catholics reflect on this encyclical and our call to care for God’s creation, we can remember the life and the words of Saint Francis of Assisi. We can also remember that serving God does not necessarily mean doing great deeds. We can serve God by being thankful for the good things he has given to us. Like Francis, we should look for ways to use our talents in the service of God and one another. Francis realized that the best gift we can give to God is the gift of ourselves.

Celebrate the Feast Day of Saint Francis of Assisi with a printable resource for the primary students in your religious education classroom. In this Saint Francis Primary Activity, young children will think of things in nature that they are thankful for and then write a poem or song praising God for creating these things. 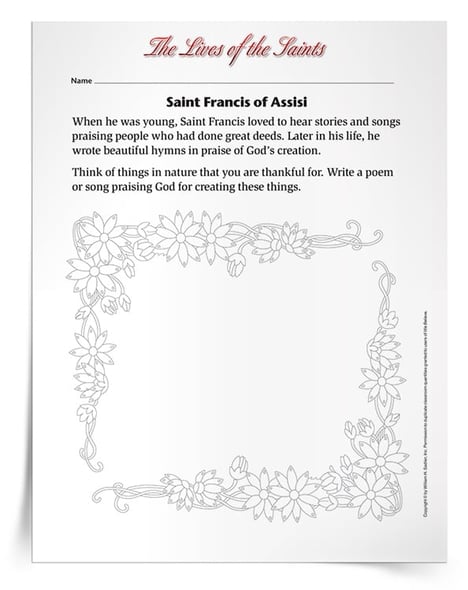