Celebrate the Feast Day of St Teresa of Avila with Students!

Feast Days provide catechists, teachers, and parents with a great opportunity to introduce children to Catholic saints. In this article, we'll explore another popular saint for kids, Saint Teresa of Avila! Our short biography and free printable activity can be used at home or in the classroom to learn about this popular saint and celebrate the feast day ofSaint Teresa of Avila on October 15. 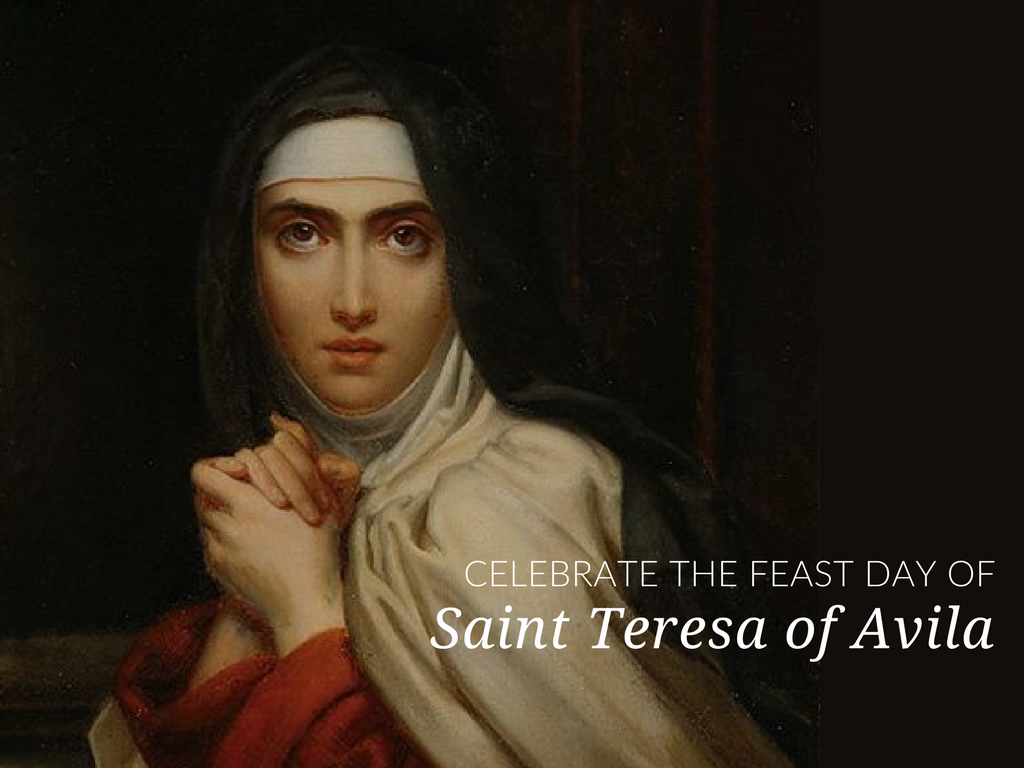 On October 15th, the Church celebrates the Feast Day of St Teresa of Avila, who said, "We need no wings to go in search of Him, but have only to look upon Him present within us."

Discover how you can celebrate St Teresa of Avila with primary students in your religious education classroom. The Saint Teresa of Avila Primary Activity featured in this article is available in English and Spanish.

Teresa was born Teresa de Cepeda y Ahumada near Avila, Spain. Teresa was the third of nine children. Her childhood was happy and ordinary.

When Teresa was thirteen, her mother died. Her father decided that Teresa would be sent to be educated at the Augustinian convent. Almost two years into her education at Agustinian Teresa  became ill and returned to her home in Toledo. At that time, there were only two life-choices for women: marriage or religious life. Teresa chose religious life, but her father refused to give permission to become a nun. When she secretly left home to join the local Carmelite Convent of the Incarnation, her father finally gave his permission.

This Carmelite Convent of the Incarnation community was a large one with 140 nuns. The nuns prayed together and privately each day, but the community was very busy. Each nun had a set of rooms (a bedroom, a small kitchen, and a guest room). Their guests could come and go freely, and nuns could leave the convent at any time for long visits to friends or relatives. The nuns were also allowed to have personal maids!

Like Saint Teresa of Avila, in our prayer, work, travel, and everyday lives, we can explore within and find our way to God.

Teresa made her solemn profession as a Carmelite nun, and for the next twenty years she lived at the convent. But in the busy convent, she found meditation and prayer difficult.

Her attitude toward her own life and toward God changed in 1555, when she was praying before a statue of the wounded Christ. She began to meditate upon Christ's sufferings. At thirty-nine years of age, Teresa discovered the price Christ paid for love, and began to want to return that love as best she could. She began to realize that the environment of the convent of the Incarnation kept her from a serious life of prayer. She began to dream of a small, poor, and fervent Carmelite monastery where the nuns could support one another in their common love of God. The Carmelite reform began.

With four companions who shared her views, Teresa founded the Carmel of San José (Saint Joseph), and the Order of Discalced Carmelites was on its way. The word discalced means "shoeless."

Teresa founded sixteen monasteries of women. To do this, she traveled long journeys by donkey through every kind of terrain and weather. She became known to the people of Spain as "the roving nun." Teresa had always enjoyed people, and many came to her or wrote to her for her advice. On feast days, she played the tambourine so that the nuns could sing and dance. Teresa wrote several books. Her teachings were based on her own lived experience, and were rooted in the Scriptures, especially the Gospels.

Like Saint Teresa of Avila, in our prayer, work, travel, and everyday lives, we can explore within and find our way to God. Download a primary activity in English or Spanish to celebrate the feast day of St Teresa of Avila.