One of the things I love about the liturgical year is the way we cycle around to the same seasons. Each time I seem to find more insight into the symbols, rituals, and stories that comprise each celebration. Lent is a case in point. The word itself comes from the Middle English word lente, meaning springtime, and shares the same root as the world length. As the light of day lengthens during the spring, we move week by week towards the joyous celebration of the Triduum and Easter. 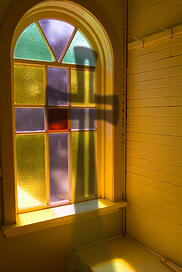 As a child, the length of Lent seemed interminable. The stark simplicity of the season and the abstaining from certain foods or habits made for a long haul. As an adult, I now cherish the six weeks as a time of offering. This happens in three ways.

Lent is a time to offer up – to relinquish certain practices in order to embrace others. Doing so freely rather than out of obligation makes such a practice all the more meaningful. For the early Christians, going without food, for example, enabled a neighbor to eat. In this spirit, fasting and abstinence become not only a practice of personal relinquishment, but also a way to nurture others.

This leads to the second form of offering – that of offering to. While we practice almsgiving throughout the year, it takes on particular meaning during the Lenten season. Giving generously to others is a form of self-sharing that leads to radical transformation. In offering monetary help to those in need, we ease the burdens others carry. By sharing our time with those who are lonely or in need of a listening ear, we provide comfort and compassion. Through works of social justice, we contribute to the well-being of entire communities and the realization of God’s Kingdom on earth.

Prayer is an integral part of Lent. Whether joining with others in communal worship or by ourselves in daily acts of contemplation and meditation, we make an offering of our lives to God. Penitential prayers take on particular meaning during Lent as a way to open ourselves more fully to the merciful love of God that is offered back to us in abundance. This humble form of prayer also calls upon us to extend forgiveness and mercy to others and thus make our own small contribution to global peace.

It’s taken many turns around the seasonal calendar for me to come to a deeper appreciation of Lent’s austerity, generosity, and piety. Through each comes an opportunity to make a sacred offering of our lives. In this way, the light that lengthens with the season only grows more radiant. 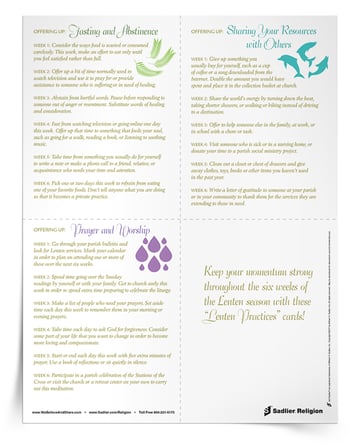